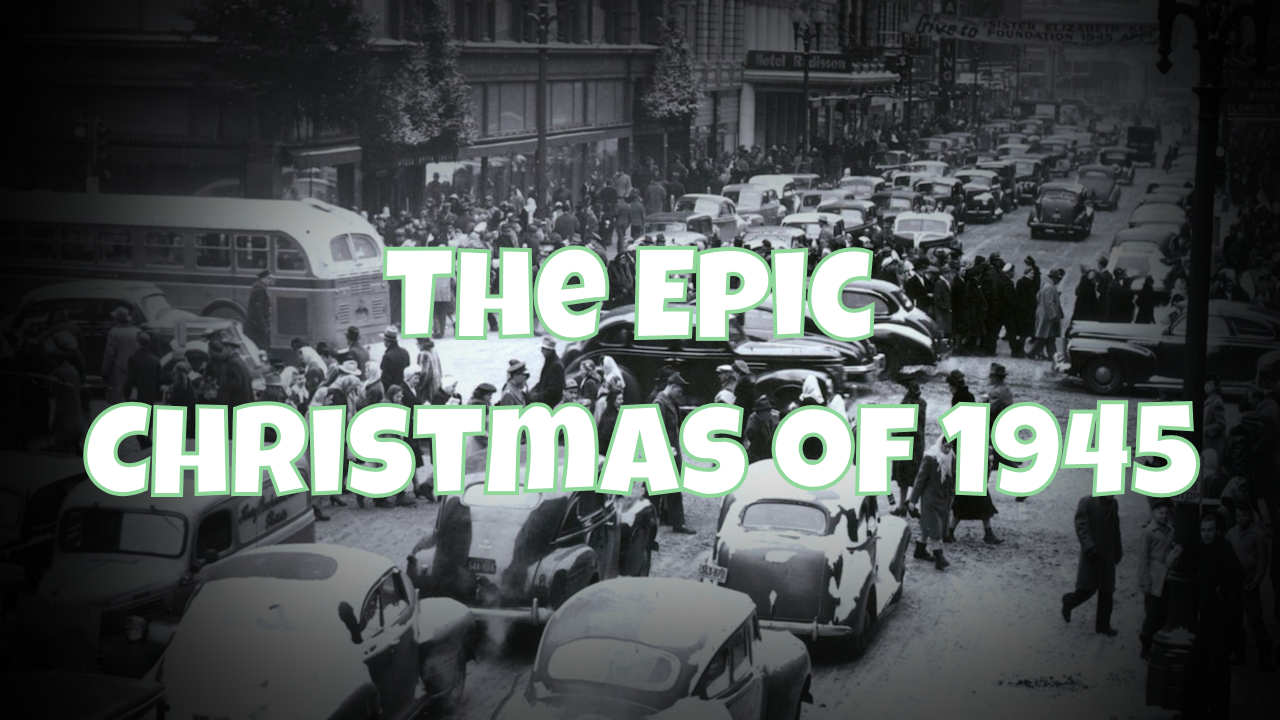 As peace broke out in 1945 a literal race began to get the world at war back home for Christmas. Historians have called the Christmas of 1945 the biggest celebration of Christmas ever.

In the below edition of the Merry Little Podcast we discuss how the years of 1941-1944 changed Christmas. It was an unprecedented period of Christmas withheld. Families separated for the first time in generations as many sent their sons and daughters off to fight a war in far-flung parts of the globe. They went not knowing when – if ever – they would return. (Many did not).

Listen to the podcast below:

But when things ended in August 1945 with V-J Day a mad rush to get home for Christmas began.

The military had imposed a point system to allocate releases and leave time in an orderly fashion. The longer one had served, the medals earned and other factors all rolled into a point tally that would push a date for release. For some, the wait to return was agonizing.

For others, even if they had the points, finding a way home was difficult, if not impossible. For service folks returning from Europe, every available ship was pressed into service. Even the Queen Elizabeth II – as ship that in normal times could accommodate maybe 3000 people – was packed with more than 17,000 service members at a time. Men would need to sleep in shifts. 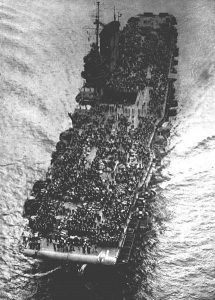 In September 1945 the military launched “Operation Magic Carpet”, a special effort designed to move as many home as possible. As the days turned to weeks the effort was renamed Operation Santa Claus, an all-out effort to use every available plane, train, ship and even private automobiles to get service members home for Christmas.

Many made it to American soil but faced the biggest traffic jams in history trying to get from the East Coast to wherever home was.

It didn’t matter which direction they came from. The backups were tremendous from every direction. New reports of the time said a westbound train was averaging 6 hour delays in pushing west, while eastbound trains were typically delayed by as much as 12 hours.

To many servicemen it didn’t matter. Once quite famously said, while trying to get home to Texas, that stepping on U.S. soil was “the best Christmas present a man could have”.

It was a time of unprecedented generosity and Christmas spirit. Civilians near the West Coast “separation centers” where soldiers and sailors were being processed to be relieved of duty opened their home to the returning heroes. These many thousands who were not-quite-home for Christmas enjoyed their Christmas dinners in the separation centers or even on the same ships that had brought them home.

This was many years before the construction of the U.S. Interstate system. Most roads were two lane and many were not even paved. Travel was much slowed and now traffic jams near just about every major city was choked. In some areas the National Guard was summoned to direct traffic.

Trains were a popular choice and many civilians gave up their seats or tickets to returning service men and women. When those trains continued to roll on Christmas Eve and Christmas Day strangers would show up at the stations with presents and food to feed those who were not yet home.

Others took matters into their own hands. A trucker from Colorado loaded 35 vets like cattle and drove them like an oversized taxi to their homes all over the Midwest.

A taxi driver from LA took six returning vets home to Chicago – a drive of some 2700 miles. And yet another dropped soldiers to their home doorsteps in Manhattan, The Bronx, Pittsburgh, Long Island, Buffalo and New Hampshire.

For those at home waiting for their loved ones to return it was a new kind of Christmas too. For the first time in years folks felt free to decorate. Trees went up and lights went on. This was an especially significant milestone for those who lived in coastal cities, who for years during the war had to cover windows at night and keep things as dark as possible. Even the White House was without a lit Christmas tree during these years.

The war years were a time of frugality and putting all-in for the war effort. Money was stashed in war bonds, scrap metal and rubber drives were held to help build war materials and basic items of necessity were rationed to support the millions of service people overseas.

Stores were rushed during the months leading up to Christmas 1945. It was as if a giant dam had burst and folks were just catching up. Everything, it seemed, was in short supply except for money and long lines at the store. At long last, people were free to shop again.

Truth be told, Christmas 1945 was a frugal Christmas not because people didn’t have money but there just was no way for them to spend their money.

Like the stores, churches too were filled to capacity for Christmas 1945. After years of praying through extended periods of separations a war-weary nation was humbled to express gratitude that it was all over.