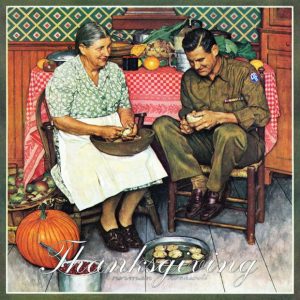 In recent years many have insisted that Christmas so overpowers the calendar that holidays such as Thanksgiving and Veteran’s Day are entirely forgotten.

Those making the argument are also those who claim Christmas celebration comes in the form of broadcast music, seasonal Starbucks cups and decorations sold in stores.

There are even those who blanch and take offense at the spoken love of Christmas or the early placed Christmas tree in a public space. Each year it is a topic of conversation and even heated debate.

What gets lost on most is that Thanksgiving and Christmas have gone hand in hand, like peas-and-carrots for nearly five centuries.

Their commonality has led to grand ironies about both holidays in modern times.

Both Thanksgiving and Christmas were officially made national holidays in the United States in 1870. Many a historian and Internet blogger have made the mistaken assumption that without such a declaration the celebration of Christmas and Thanksgiving was fragmentary at best.

This is not true. Both Thanksgiving and Christmas were widely celebrated long before the US Congress got around to declaring them official.

That Thanksgiving and Christmas have been celebrated in diverse ways has always been true. For some, both holidays are purely secular affairs. They are “time off”, at best.

For others both are sacred days of worship.

In this respect both Thanksgiving and Christmas share common roots.

Thanksgiving of 500 years ago was usually not a specific day on the calendar. It was a declared acknowledgement of God.

When there was a great battle won or a large harvest to celebrate a period of “thanksgiving” was declared so that family could gather and thank God for their good fortunes.

Some years saw many Thanksgivings and while gathering and feasting have always been a part of Thanksgiving its primary purpose was worship.

Christmas too was a time of gathering and feasting around a religious event.

While there is no doubt that end-of-year celebrations have long been distorted as a season for mirth and debauchery, and that the early sacred celebrations of Christmas likely had nothing to do with that time of the year, traditions of many Christian societies linked Thanksgiving and Christmas due to their religious significance.

In Puritan American history the celebration of both nearly a month apart was an undeclared tradition for the most practical of reasons: late November through December was a time when family could, after a long year of toil, gather together and enjoy the fruits of their labor in celebration.

The literal celebration of “over the river and through the woods” has been an American way of life for over four hundred years.

In those four hundred years the traditions of the holidays have morphed.

For Thanksgiving, things like football and parades have crept in to diminish its religious roots.

For Christmas, everything from Christmas trees to eggnog have watered down its pure celebration that focused squarely on family.

Folks still make both Thanksgiving and Christmas about family. But what family does on and between these two holidays is growing ever more diverse.

But the modern argument that one overshadows the other is false. Thanksgiving and Christmas have never been meant to be observed without the other. In fact, their marriage is what has made it “the holiday season”.

The secular invasion of all holidays continues to erode their meaning. Halloween, for example, was long more about the celebration of the dead in a family-way – the honoring of past generations – than what it has become today.

Efforts to counter that trend are endless in the tug-of-war over holidays and what they mean. For example, Thanksgiving is now also National Family History Day.

It is a grand irony that Christmas Day is also now known as National Pumpkin Pie Day. Pumpkin pie, like Thanksgiving and Christmas, was never a thing associated with merely one day on the calendar.

It too bridged the gap between Thanksgiving and Christmas, both as a food and as a tradition.

Christmas critics and those who now claim godlessness can take heart as well with the celebration of Thanksgiving and Christmas as secular affairs.

December 21st, as middle of the season as it comes is National Humbug Day and December 23rd is Festivus, which is the day set aside to grumble and protest over the gross commercialization of Christmas.

I’m just offended that Festivus has crept as far back as August on the calendar. Complaining about Christmas seems to last longer than Christmas itself.