I saw a couple of posts on this subject and thought I’d share the following with you. As with many of you, the whole “Happy Holiday” thing is a big pet peeve of mine. I make it a point to say to folks “Merry Christmas” especially when they wish me “Happy Holiday”.

For several years now yours truly has appeared at my church on Christmas Eve. Each year I come out at a certain point in the Mass (the Homily for you Catholics out there) and talk to the folks about the true meaning of Christmas. It’s very entertaining (and hopefully inspirational) for both the children and the adults. The Priest and I usually interact with each other or the congregation and everyone seems to get a kick out of Santa visiting during the Mass.

Each year the Priest and I come up with a theme for Santa's talk. I am still working on this year's, but I thought I would share with you what Santa had to say last year...

FATHER: Oh thank goodness you got here. I was beginning to worry.

SANTA: I’m sorry for being late. Very busy night you know. Thank you for inviting me back. I always look forward to my visits to here at St. Mary’s. I trust the new joke book I gave you last year was helpful.

FATHER: Well to tell you the truth. I may need some new jokes. The last batch isn’t really cutting it. Do you think you can do anything on such short notice?

SANTA: I’ll see what I can do.

(Santa addresses parish)
SANTA: Well now. Merry Christmas everyone! Oh come now. You can do better than that! Now let’s try that again shall we? Merry Christmas!

SANTA: Ho! Ho! Ho! That’s much better! Did you notice I wished you all a “Merry Christmas” and not a “Happy Holiday”?

You know. I can remember it was only a few years ago that people would greet each other all the time with "Merry Christmas" or even “Happy Christmas”. Now hardly anyone says "Merry Christmas". Now it’s all "Happy Holidays", “Seasons Greetings”, or "Have a good one".

Oh I understand the concern not to offend anyone. But why should people take offense at greetings for a holiday that they don't happen to celebrate? Would any of us be offended if someone wished us Happy Chanukah? I would certain hope not. What could possibility be offensive about good wishes? Nobody gets offended at "Happy Thanksgiving” or "Happy New Year" or for that matter “Happy Birthday”.

So why not make it a point to wish people a Merry Christmas? And if someone does take offense, simply apologize. After all, Christmas is the birth of Christ. That’s why we celebrate Christmas. Isn’t it more appropriate for us as Christians to say Merry Christmas instead of Happy Holidays?

Well I don’t have a lot of time. After all this is my busiest night of the year you know and I must be on my way. But before I go let me wish all of you a Very Merry Christmas and a blessed New Year!

And a very MERRY CHRISTMAS to you!!!
Expand signature
Hallelujah! Holy S***! Where's the Tylenol?
C

I am working on this years "script" right now. As soon as I finish it I will post it here. Maybe I can get some feedback on it.
Expand signature
Spreading Cheer Throughout the Year!
www.jdrfoundation.org

i wouldnt be upset if someone said happy chanukah, I would prefer it to nothing

I say Merry Christmas and it's up to them to receive it or reject it.

So much fuss about this had made some people afraid to say it and I think that's sad for we do have freedom of speech which applies to everyone.

So MERRY CHRISTMAS and the best to you all in the coming year.
Expand signature
[SIGPIC][/SIGPIC]

Two years ago I went into a Target around Christmas time to pick up a couple of things. While strolling through the “seasonal” isle I noticed a sign that read: “30% OFF ALL HOLIDAY TREES”.

The woman looked at me like I had two heads. She told me that they were all Christmas Trees. I then told her that I wanted to purchase a Christmas Tree and if all they had were "Holiday Trees" then I would have to go over to Walmart to buy one. 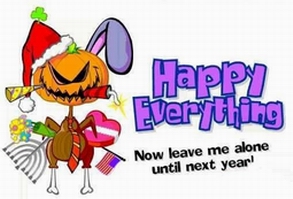 I was watching the Christmas special of Blue Collar TV with Jeff Foxworthy, Larry the Cable Guy and Bill Engval, and there was a skit put on by Larry the Cable Guy where he does what's called a Pollically Corrected up Tale. He did 'Twas the Night Before Christmas. I can't remember how it was PC'd, but it was funny how he said it. Even though it was done tongue in cheek, there was a message there that I liked. This country is getting to uptight not to offend anyone, that we are getting stupid with what we can and cannot say. What happened to the first ammendment. Now I'm not a bigot or racist and agree with what you can't say with those issues, but when it comes to Christmas, Jesus and what not, what the @#%! is going on here?!?! (I'll get off my soapbox now)

i have this on dvd

Anyone know what or if there was an original Seasonal greeting?
Expand signature

Anyone know what or if there was an original Seasonal greeting?
Click to expand...

Anyone know what or if there was an original Seasonal greeting?
Click to expand...

I've not been able to find out. But they insist its correct.
Expand signature

History of the phrase

"Merry", derived from the Old English myrige, originally meant merely "pleasant" rather than joyous or jolly (as in the phrase "merry month of May").

Though Christmas has been celebrated since the 4th century AD, the first known usage of any Christmastime greeting, "Merry Christmas and a Happy New Year" (thus incorporating two greetings) was in an informal letter written by an English admiral in 1699. The same phrase appeared in the first Christmas card, produced in England in 1843, and in the popular secular carol "We Wish You a Merry Christmas."

The then relatively new term "Merry Christmas" figured prominently in Charles Dickens' A Christmas Carol in 1843. The cynical Ebenezer Scrooge rudely deflects the friendly greeting and broods on the foolishness of those who utter it. "If I could work my will", says Scrooge, "every idiot who goes about with 'Merry Christmas' on his lips, should be boiled with his own pudding." After the Spirits of Christmas effect his transformation, he is able to heartily exchange the wish with all he meets. The continued popularity of A Christmas Carol and the Victorian era Christmas traditions it typifies have led some to credit Dickens with popularizing, or even originating, the phrase "Merry Christmas"[2].

The alternative "Happy Christmas" gained wide usage in the late 19th century, and is still common in the United Kingdom and Ireland. One reason may be the alternative meaning, still current there, of "merry" as "tipsy" or "drunk". Queen Elizabeth II is said to prefer "Happy Christmas" for this reason[3]. In American poet Clement Moore's "A Visit from St. Nicholas" (1823), the final line, originally written as "Happy Christmas to all, and to all a good night", has been changed in many editions to "Merry Christmas to all", perhaps indicating the relative popularity of the phrases in the United States.

thats why its good to have a santa mod

Thanks for the info. Since Her Maj and I aren't close, personal friends, I'm sticking with "Merry Christmas" thanks. :-D
Expand signature

nuts, I thought we had an in with the crown

dvdguy said:
nuts, I thought we had an in with the crown
Click to expand...