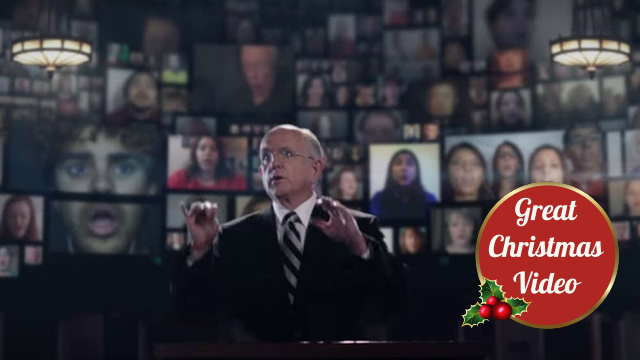 Imagine combining the voices of thousands in a massive performance of Handel’s Hallelujah Chorus. That was the vision in the creation of this video from just a few year ago:

Handel’s Messiah was originally written for Easter but has over the centuries now become associated with Christmas. The Hallelujah Chorus is the climax of what Handel himself saw as a mircle. Of creating Messiah Handel said, “I did think I did see all Heaven before me, and the great God Himself seated on His throne, with His company of Angels.”

The 18th century critics of music were not all that enamored of Handel’s Messiah – especially in London. However, when King George stood during the Hallelujah Chorus it got noticed. While some historians have ventured to guess why King George stood the truth is that he never explained it. But when the King arose, so did the audience and thus was born the tradition, still practiced today, of standing for the Hallelujah chorus.

During the month of December the Hallelujah chorus is performed by groups large and small across the world. It is one of the most performed songs of Christmas each year.

This video was created as part of an Easter effort by the Tabernacle Choir and it took better than 2500 video submissions from singers all over the world. If you watch the video closely you can see the faces of many famous — and many unknown — singers in the virtual Choir.

The videos are not people just lip synching the music. The Tabernacle Choir sent detailed instructions for each musical part and videos were screened before inclusion. Timing, accuracy, and, of course, whether or not each part was performed correctly were all considered in making of the video.

People of various ages submitted videos, ranging from about 12 to about 80. One singer even dressed up as the composer himself, George Frederic Handel, for his video submission.