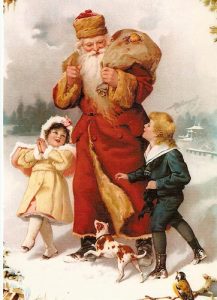 Mrs. Claus’ eyes were full of tears by the time I arrived at the hospital.

Santa stood there stunned, as if hit with unbelievable news. “What is it?” I asked.

Ryan had just hours to live.

Santa and Mrs. Claus had met the boy just months previous but it was only within the past few days that things seriously took a decline and hope was lost.

These are the calls Santa hates to take.

How do you present the hope and love and brightness of Santa Claus to a dying child?

“Why am I here?” I asked, nearly sucking in my breath at the bad news they shared. “How can I help?”

Santa looked at me.

I was a little taken back.

I had now seen this man in several personal situations and had never seen him at a loss for words.

At times, I even felt he was inspired.

How could I possibly help him? What would I say to the boy if I was in his shoes?

I recalled something I had heard on Clausnet.com before.

He nodded, as if the answer was the only thing acceptable in that moment.

As we entered Ryan’s room Mrs. Claus clung to my left arm. As was so often the case, she would not be included in the conversation.

She would be a visible but silent participant, a supporting actress who rarely got the applause. In this scenario, she was grateful and I could feel it.

He smiled weakly and barely lifted a hand from the sheets. His chest was bare, his feet uncovered, an air mask covered his small mouth and nose. Despite his illness he exuded the love, brightness and purity of a child.

Ryan would die at just 8 years of age.

“Ok,” Ryan said, almost as if he believed it.

There was a long, silent pause. Not a lot of words could be thought of or were necessary.

Suddenly Mrs. Claus looked up. “Ryan,” she said. “I want to share a song with you. Would that be ok?” He nodded yes and Mrs. Claus began to sing a song I had never heard, a song about where snowflakes go after Christmas.

It was a hauntingly beautiful tune, yet bright and cheery. She eased from that tune into a song I am familiar with, “I am a Child of God”.

Ryan smiled at the familiar song.

The music erased the tension and freed Santa from his justifiably enormous fears.

It was as if sunshine had broken through the clouds and things were basking in a golden glow. It was, quite clearly, a sacred moment.

As Mrs. Claus completed the song Santa took a seat next to Ryan and held his hand.

This curious moment reminded me of a conversation Santa and I had shared about Mrs. Claus months before:

“She didn’t want anything to do with it at first,” he said. “The idea of dressing up as an old lady really did not appeal to her. I had the toughest time convincing her she is an old lady!”

Santa explained that he isn’t half as good when she is not with him.

Indeed, many times I’ve watched them work as a team, communicating with eyes and nudges, one picking up the other in any given moment – just as with this moment in the hospital with Ryan.

The work with parents is nearly as magical as the experience with kids.

This is Mrs. Claus’ expertise and Santa is quick to credit her decades as a mother and grandmother for knowing just what parents want.

“I once had a lady livid with me because I would not promise her daughter a certain thing for Christmas. She told me in advance of meeting the little girl what she wanted me to say and normally I don’t have a problem with that but in this instance I felt it was out of character for me and for Santa Claus” Santa said. “Long after that child was out of earshot that woman was giving me the business for not complying with her wishes. Mrs. Claus stepped in and saved my butt, telling the woman to use her heart to hear what I was saying was true. It never would have occurred to me to speak to her that way, my inclination was to give it right back to her. Mrs. Claus has the touch whenever I fumble and am at a loss or in danger of losing it.”

Mrs. Claus has talent beyond just the parents, of course.

Kids, especially little girls, are enchanted with the very idea of Mrs. Claus.

Her outfit is a flowing red velvet gown, very simple in design and very modestly adorned with subtle accents of white trim. “I can’t overshadow Santa,” she once told me.

“I complement him. I complete him. But kids sometimes see Mrs. Claus as less imposing, someone who might answer questions they might not ask Santa. I love that!”

Mrs. Claus also has a knack with babies and frightened toddlers.

Watching Santa and Mrs. Claus work on that level is amazing. There is no hesitation to get down on hands and knees, though it sometimes is painful for them to do so.

“Fear is the opposite of faith,” Mrs. Claus says. “Santa is all about faith and believing. We can never have children frightened of Santa.”

Santa tells me he nearly gave up being Santa after a few appearances.

But as Mrs. Claus came around and they worked to develop their rhythm, their technique, their “style” and their “Clausness”, as they like to say, they found it fulfilling as a couple to serve in the capacity of Santa and Mrs. Claus.

“Santa has become such a secular figure that I can get away with teaching morals in the suit than I cannot when out of the suit,” Santa noted. “If I show up at a school and say

“Merry Christmas!” during an event nobody thinks a thing about it because I’m Santa Claus. If I were saying those same words as Joe Citizen, I have to be more measured, more inclusive, more politically correct and all that other nonsense. It is ironic to me that Santa was once a religious figure and isn’t any more, yet he can be such a powerful influence for good.”

Business and the stuff of life prevent Santa and Mrs. Claus from most activities during the year, unless, of course, pressed in to duty by situations like Ryan’s.

But when Santa hangs up his suit after Christmas he is content to let him rest until December rolls around again.

It is now how Santa spends what vacation time he’s got coming to him after a year of work. Being Santa relaxes him and releases him from the pressures and inconveniences of everyday stuff.

“We do this to relax,” Mrs. Claus laughed.

“We’re blessed, we really are. We’ve traveled a lot. We enjoy our grandkids. But we are not the retiring type. We were lucky to find a form of service that, yes, it’s work but it is so rewarding and fun at the same time. I love what December has become for us.”

“I could not be like some of these guys who walk around wearing red all year long,” Santa said. “I love Christmas and I love being Santa. But to keep Santa special I have to keep him separate. I think it is a sad commentary when a grown man has to maintain an identity outside of himself in order to be validated. There might be a handful of places where a year round need for Santa is necessary but for the most part Santa belongs at Christmas and, lucky for me, that’s when I have the time to do it.”

This theme of service seems to be something Santa and Mrs. Claus hit on a lot.

“I’ve operated my whole career on the idea of servant leadership,” Santa said.

What works for the boss works for Santa. What people really want from Santa isn’t toys and it isn’t presents. It’s love. It’s warmth.

It’s that Christmas feeling we should have present every day of the year. I could not be Santa Claus without that servant mentality.

The absence of self leads to the expansion of self. Serving others always achieves that end.

When you lose yourself you find yourself.”

This is the final in a series of articles telling the true story of the Servant Santa.