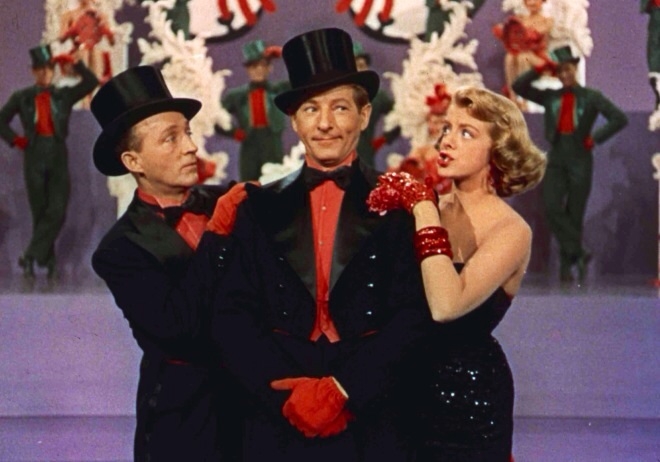 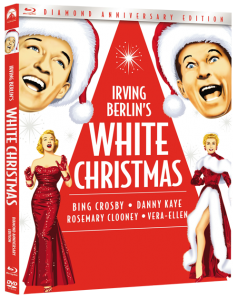 Writing movie reviews 65-years after a movie has been released and become a classic isn’t fair. How do you diss a classic?

But let’s be honest. White Christmas might today be considered a classic and it might be beloved and re-watched season after season but let’s just agree upfront that it does not go to the head of the line for movie-making. It is what it is. Fun. Schmaltzy. Hopelessly romantic. Even Christmasy.

…it’s thin on plot, hastily put together, not really well acted and, as far as musicals of the era go, it does not really rank up there.

So there. I said it.

White Christmas was bound to be a hit no matter how bad a movie it turned out to be. So how then does it continue to enjoy such tremendous popularity after all these decades?

It all gets back to the song and the star.

White Christmas hit America and the world at a time when Christmas was appreciated if only because those Christmases of 1942-1945 could never be “just like the ones I used to know”. The song resonated with everyone, whether it was the soldier thousands of miles away from home or his girl and his mother waiting for him to return. The song continues to resonate for the same reasons. We don’t leave home all the time for the same reasons we were leaving in the mid-1940s. But we leave. Hearing White Christmas reminds us of home and Christmas.

This movie had to star Bing Crosby. Dozens — even hundreds — of others have sung the song over the years but his is the version we have to hear. Nobody — not Sinatra, not Elvis, not Blake Shelton or Mariah Carey or even Michael Buble — can do it justice.

Crosby was pretty limited as an actor. Some roles, such as Father O’Malley in Going My Way, were made for Crosby. Ironically, for as much as Crosby was made to sing White Christmas he was clearly uncomfortable in parts of the movie White Christmas. He is a mismatch for Danny’s Kaye’s energy and has zero chemistry with Rosemary Clooney, his love interest in the film.

Crosby stars with Danny Kaye, playing army buddies thrown together after the war as entertainers who happen upon their old army general who has fallen on hard times.

They band together with a pair of single up-and-coming female sister singers who are looking to exploit the fame of Crosby and Kaye to boost their act and careers.

The predictable hi-jinks ensue as musical number after musical number roll by — almost none of them having to do with Christmas, by the way — until the ultimate Christmas climax with Bing belting White Christmas in splendor with his co-stars. That’s your movie.

Now let’s get to nitty gritty about how this movie is viewed 65 years later. Filmed in “Vista Vision” White Christmas was a technological wonder of its time and it returns handsome dividends today. The newest Diamond Anniversary Blu-Ray is stunning in its digital, restored glory.

This Paramount package is loaded with extras that any fan of the movie, the era or Christmas would greatly enjoy.

Vintage Holiday Moments — 20 minutes of raw footage from television in bygone eras featuring Crosby and Kaye at different times of their careers on television doing Christmas. This little snippet of Christmas back in time is more than worth the asking price for the whole package.

Sounds of Christmas Audio CD — Classic Christmas music from Crosby, Kaye, Clooney and special guests. Bound to become a collectible because of how it is packaged.

Audio Commentary — from Rosemary Clooney, who remembers the production, Irving Berlin and starring with Bing.

Featurette: “Danny Kaye: Joy to the World” — Kaye and his good works remembered by stars and family

Featurette: “Irving Berlin’s ‘White Christmas’” — the story behind the creation of the song

The History of White Christmas