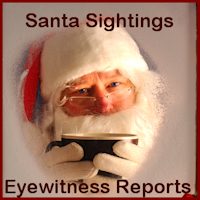 I was only 17 years old at the time. And I haven’t seen him since. But I know he’s real and nobody could ever tell me different.

We had gone to bed about 5 hours before, after a long night of making merry. I slept in a room with two of my little brothers. And I was up thinking that it just might be my last Christmas at home.

I got up to answer the call of nature and, because I felt a draft, I went downstairs to check things out. The kitchen was a mess from the night’s festivities and I accidentally knocked a glass over on to the floor when I reached for the window. It fell with a loud crash and it was followed by my rather boisterous choice of words. To be blunt, I said something that wasn’t right. In fact, I said something I would never even say in front of my mother.

Just then I saw him. From the living room, where our tree was, I heard a man clear his throat. He startled me and I looked up, thinking it might have been my old man. But it was Santa!

And man — was he ticked!

He stood there with his hands on his hips giving me the dirtiest look. I have always pictured Santa like they show him in the Coke commercials or in the magazines and in real life he looked nothing like that. He was obviously very perturbed at me for polluting his merry air with my cursing. I was frozen in my place and words completely failed me.

But he kept staring at me so I had to say something.

Like a mouse, I squeaked out: “Oh excuse me”. Then, without even thinking about the broken glass on the floor, I turned and went back upstairs.

I laid in bed awake all night, just thinking about what happened. I thought of all the possibilities. There was no way it could have been anyone else except the actual Santa Claus in the flesh. I was embarrassed and mad at myself for being so dumb. How could I let the opportunity to talk to the real Santa pass? And how could I have acted so stupidly? I was sure that Santa had to think I was the biggest idiot in the world.

In the morning, we all got up and did the Christmas thing. I wanted to tell everyone that I had seen Santa that very night. But I was afraid they wouldn’t believe me or take me serious. I waffled for a long time thinking one minute that I would tell them and then reversing that thought the next minute. I was uncertain what to do.

Then Mom went into the kitchen and stumbled upon the broken glass. “Hey! Who did this and didn’t clean it up?” My head snapped. I almost got ready to admit all but then my brother chimed in: “Maybe it was Santa!”.

“Wait a minute,” I thought. “I can’t tell my mother. She will know what I said right there in the presence of Santa Claus.” No wonder Santa made no effort to hide from me. He’s like a UFO. You can see him but don’t tell anyone that you do. They will think you’re nuts.

Santa knows this. In my case, he knew that nothing good could come from telling anyone about my brush with him. So from that day to this, I have never told a soul. But I swear it’s true.

No, wait. I gave up swearing a long time ago. But if you don’t believe me, ask Santa. He’ll tell you.