Norman Rockwell was an artist who captured American life and culture on his canvas like no one else. Born at the end of the Victorian era his works documented a time when Christmas had evolved tremendously. By the time he passed in 1978 nothing quite said Christmas without Rockwell’s unique take on it.

Art was Rockwell’s passion from the time he was a child. By age 14 he had enrolled in art classes at the New York School of Art. Two years later he left high school to start his studies at the National Academy of Design.

Ironically, critics of Rockwell’s art accused him of not really being a painter. That was more of a comment on his subject matter than on his skills. Even still, Rockwell himself was prone to referring to himself as an illustrator, and not a classic painter. 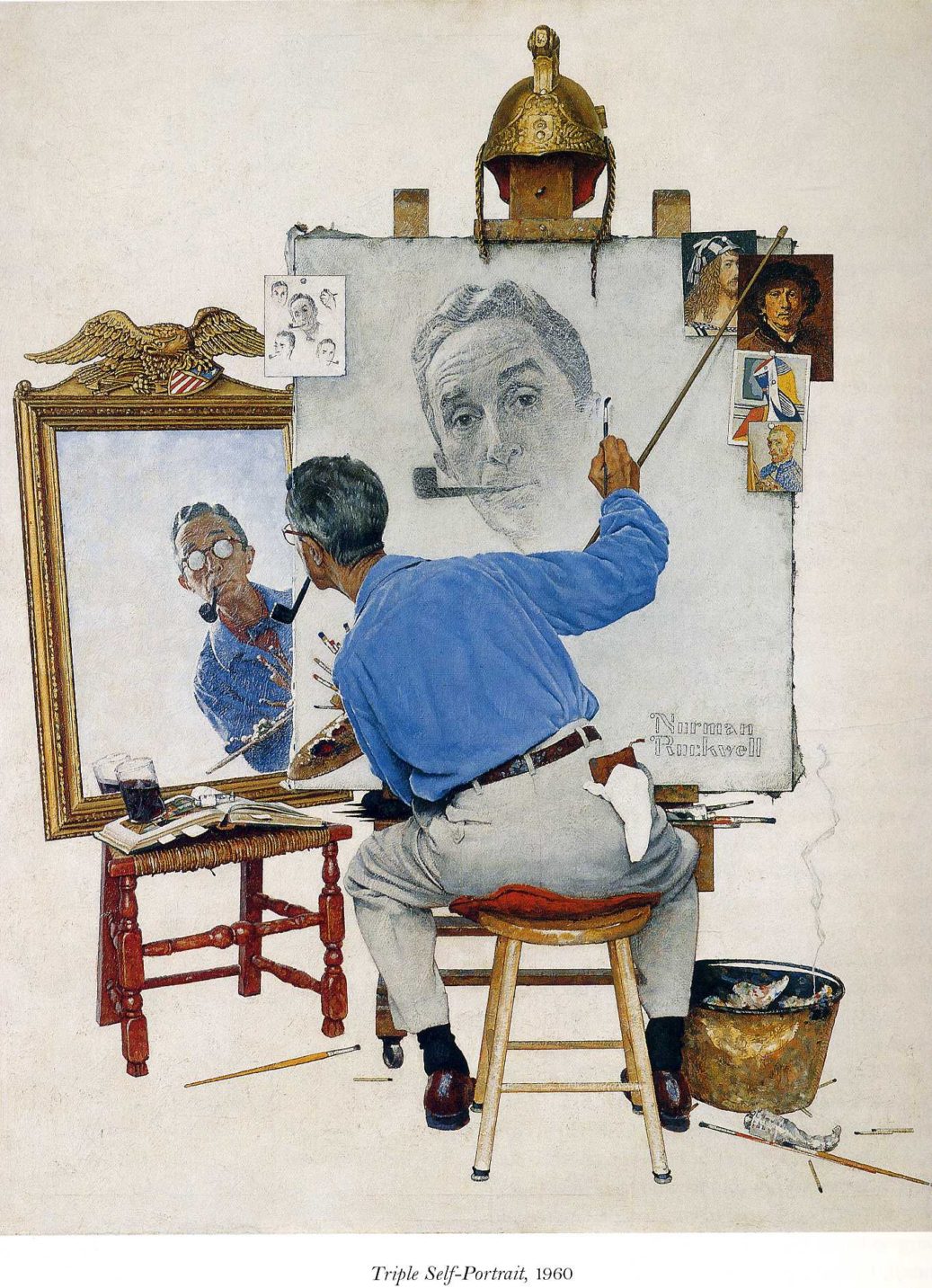 ~ It Began with Christmas ~

His first commission came while just a teen of 16 years of age – a project used for four Christmas cards. That led to his first work for Boy’s Life and an association with the Boy Scouts of America that lasted for the course of his life.

In 1916, Rockwell was hired by The Saturday Evening Post. When Rockwell began working for the Post, his humorous and dead-pan depictions of American life tugged at the heartstrings of the public — even if they weren’t so adored by art critics.

His work with the Saturday Evening Post would pace with US history. He painted about Charles Lindbergh and his crossing of the Atlantic, he covered both World Wars and even the Moon Landing.

He was popular. But the real art world shunned him for the most part because Rockwell’s humor and light touch was his trademark. 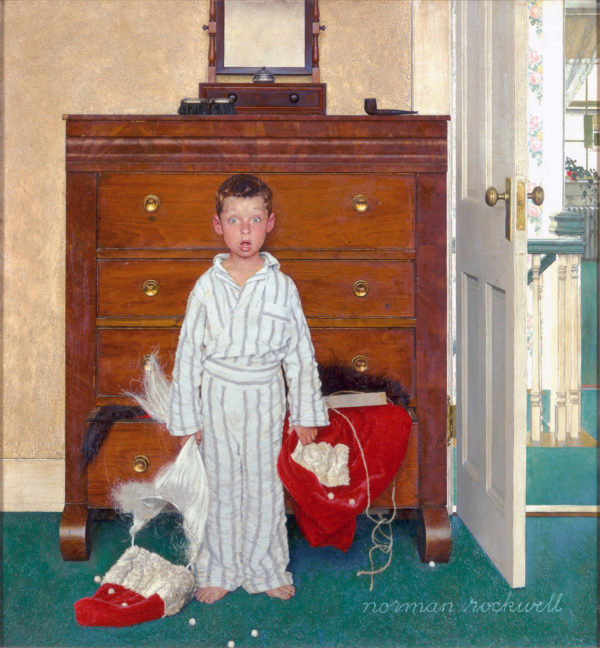 Even now people seek to emulate the merriment and magic exemplified in Rockwell’s imagery — from tired toy store clerks to a boy discovering Santa kissing his mom to the great holiday dinner. Rockwell produced 29 Christmas covers as well as greeting cards and other holiday scenes.

Rockwell’s frequent engagement with Christmas as subject matter was due in part to his important professional relationship with The Post. 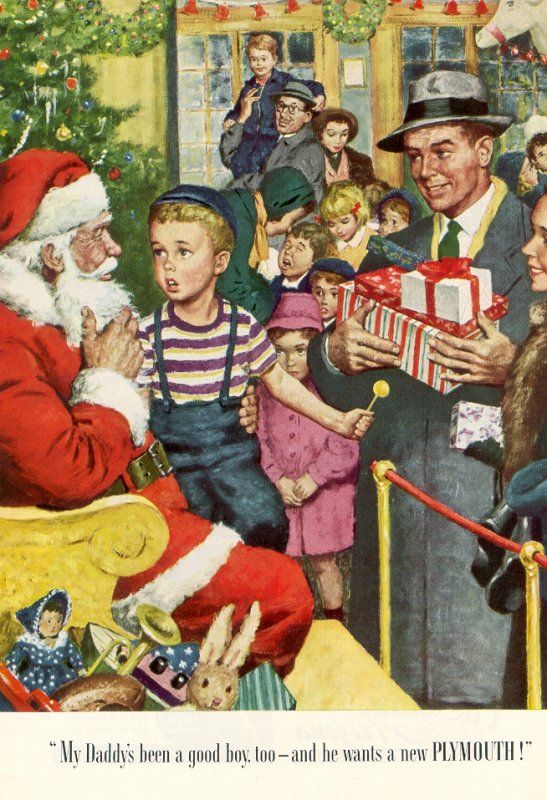 It began as a sketch of what he had in his mind. Then he would scout for the right props and appropriate locations. As these pieces came together Rockwell would then use photography to stage his scenes. 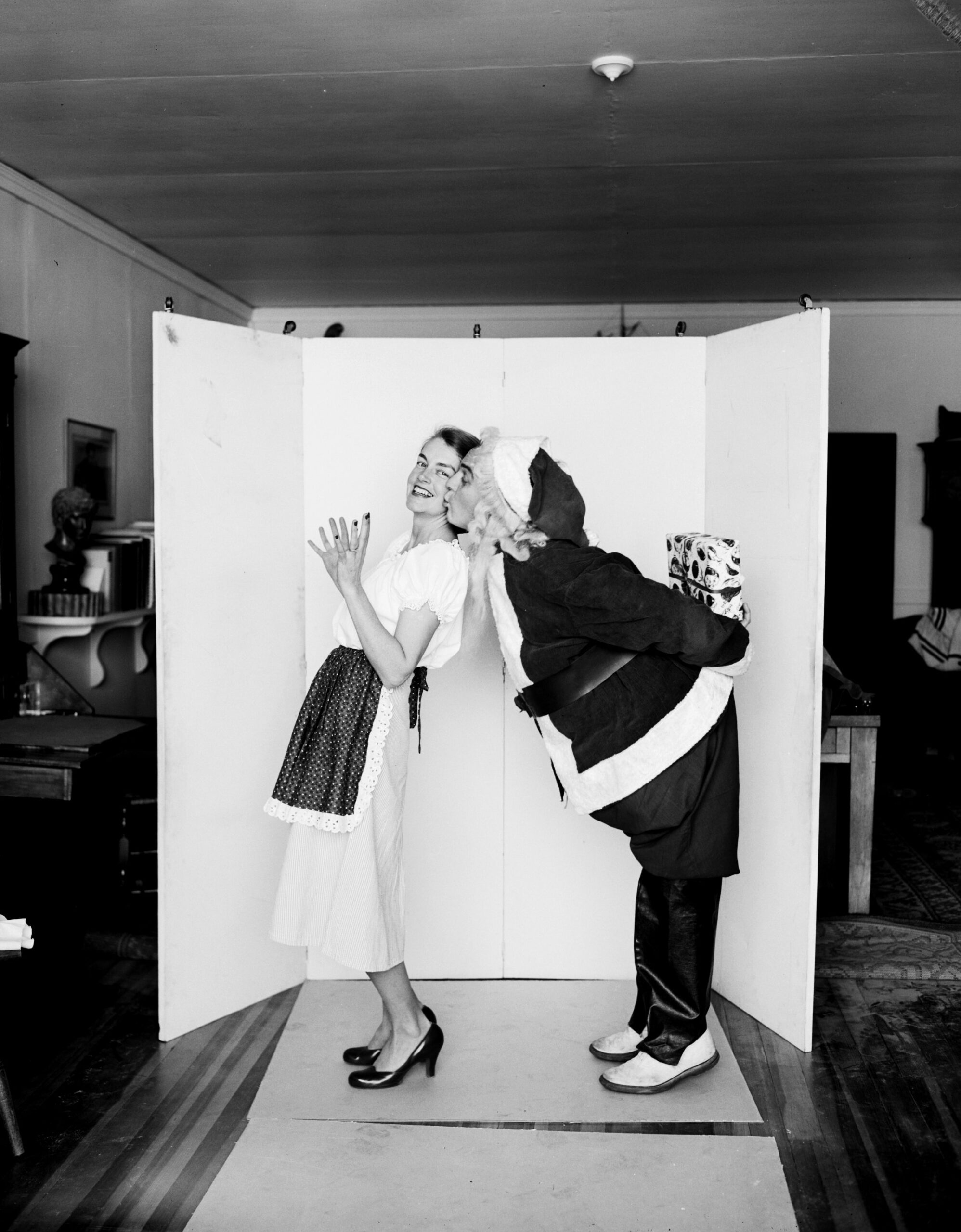 Only then did he bring out the canvas to produce the finished work. Over his lifetime Rockwell produced better than 4000 paintings that told stories and brought smiles. 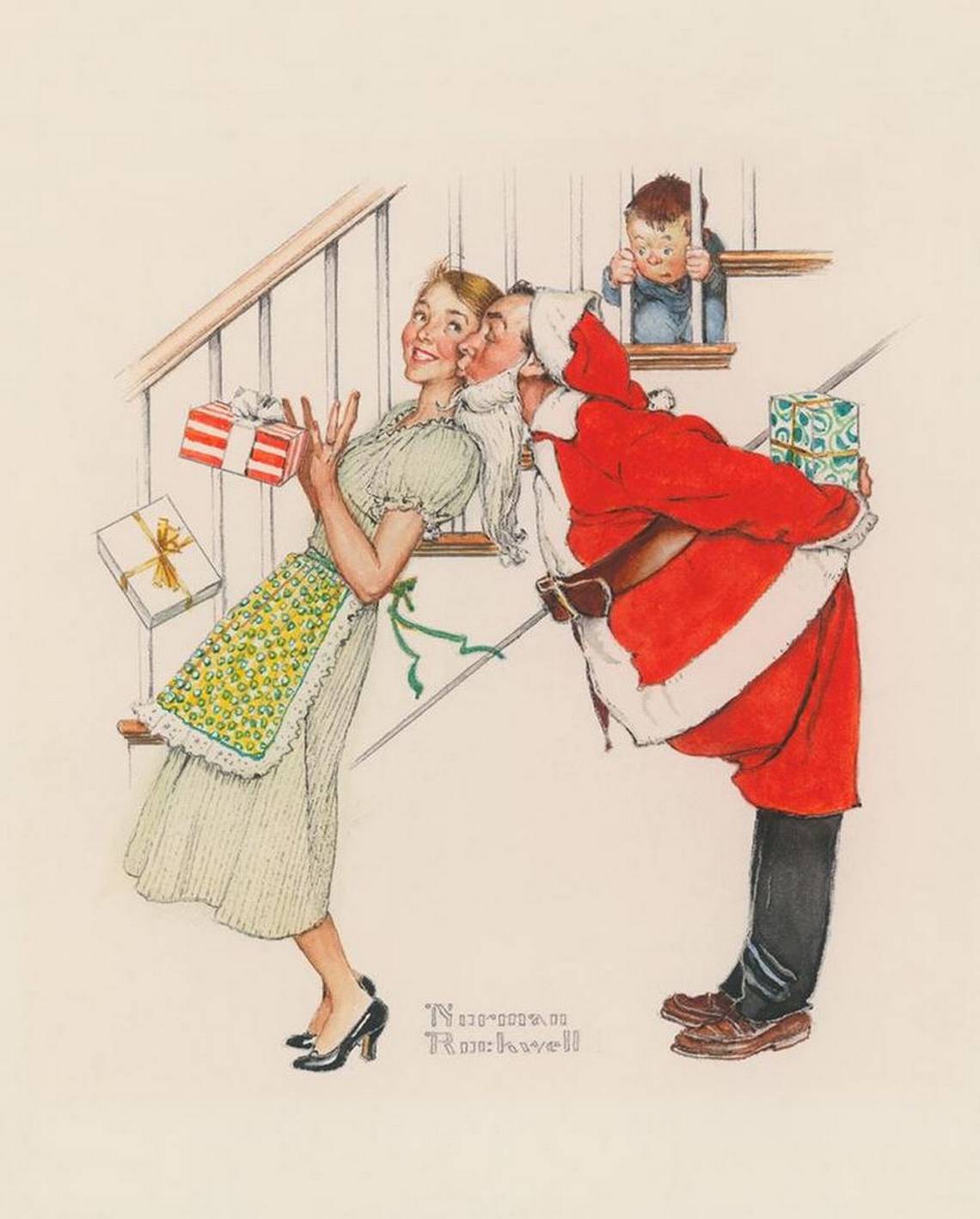 It was not all light hearted fare. Like many Americans, Rockwell wanted to make a contribution during World War II to the war effort. He decided to paint a series he would call the Four Freedoms. 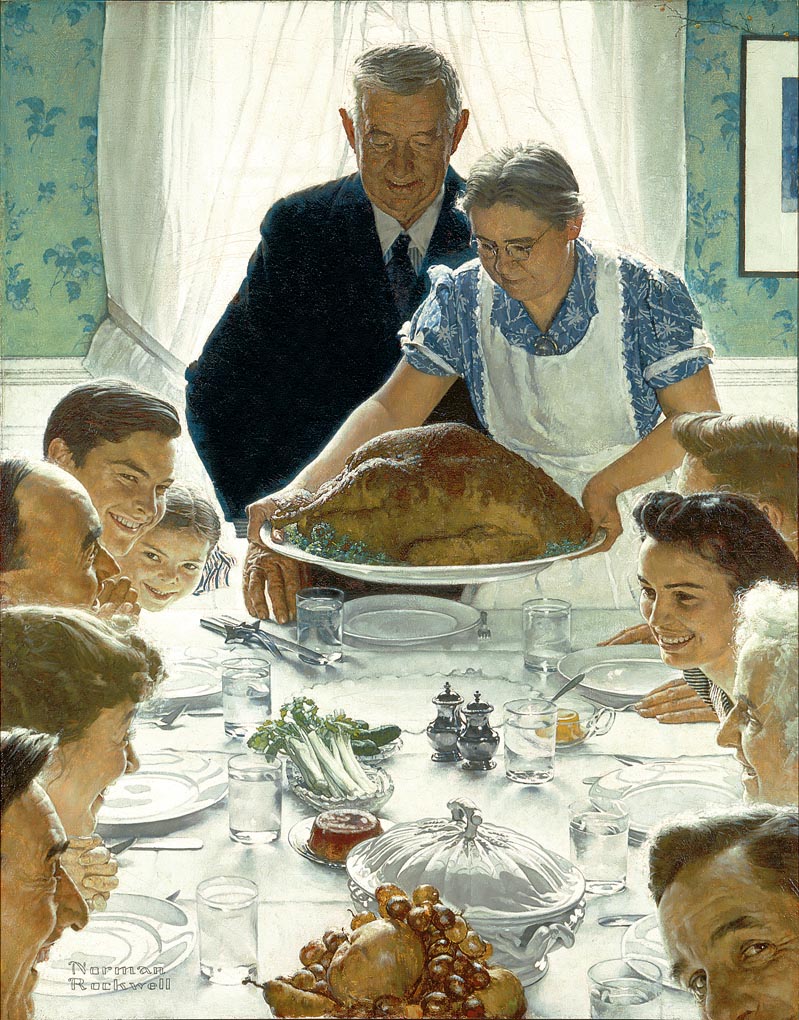 But the idea just did not resonate with the military.

After many rejections Rockwell found himself making once last appeal; to the Office of War Information “or, to speak plainly,” wrote Rockwell in his autobiography, “the propaganda department.”

“I showed the Four Freedoms to the man in charge of posters but he wasn’t even interested. “The last war you illustrators did the posters,” he said. “This war we’re going to use fine arts men, real artists.”

So Rockwell took  the idea back to The Post – who eagerly snapped them up. Those images became some of the most iconic images of the time and helped to define Rockwell’s career.

When the Four Freedoms were done, “The results astonished us all.” Wrote Saturday Evening Post editor Ben Hibbs. “Requests to reprint came in from other publications. Various Government agencies and private organizations made millions of reprints and distributed them all over the world.”

“The Treasury Department took the originals on a tour of the nation… to sell war bonds. They were viewed by 1,222,000 people in 16 leading cities and were instrumental in selling $132,992,539 worth of bonds.”

Norman Rockwell’s art reflected his New England heritage and upbringing. He made no secret that his angle was always very regional. He painted life as he saw it where he was – especially Christmas.

That New England perspective touched people across America. Rockwell was holding up a mirror to many people through his art. That was the core of his popularity.

His 1948 painting titled Christmas Homecoming included a variety of personal touches for Rockwell: 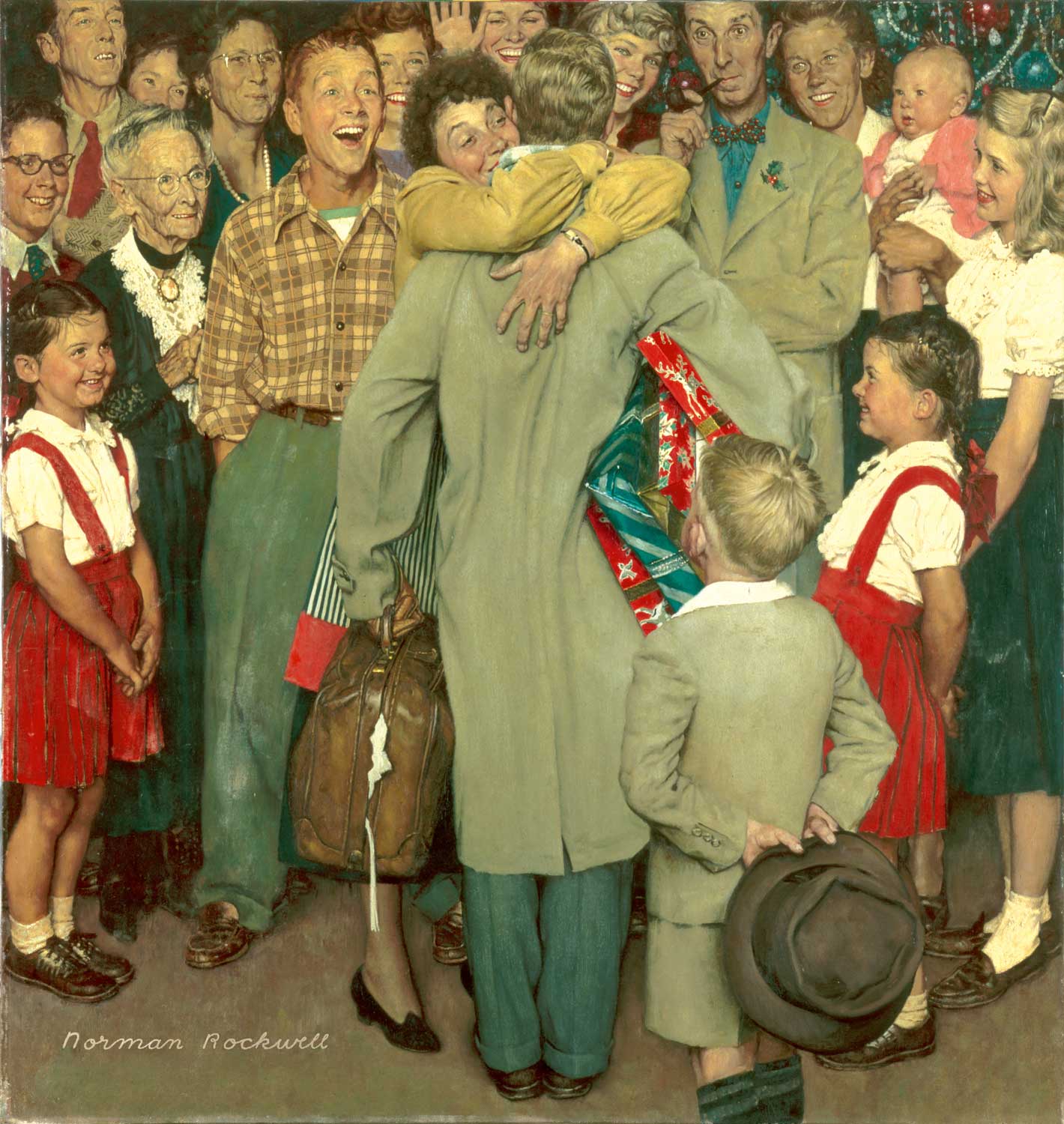 Rockwell created his vision of a happy Christmas reunion by gathering all three of his boys in a single painting. We see the back of his oldest son, Jerry, receiving a joyful hug from his mother, Mary. To the left of Mary, in a plaid shirt, is son Tommy. Youngest son, Peter, appears on the far left wearing glasses. To Mary’s right, with that ubiquitous pipe, is happy Dad, who occasionally made cameo appearances in his paintings.

To make this scene of the homecoming even more joyous, Rockwell added friends and neighbors from his community in Arlington, Vermont. Many of these people appeared on other Rockwell covers, like the little boy holding the hat, who was the main character in Rockwell’s A Day in the Life of a Boy. Rockwell also used the boy’s baby sitter—the blonde girl on the far right—and his mother and baby brother, who was dressed in a pink sweater. The little girls in red jumpers are actually one girl—the daughter of Rockwell’s doctor—who was so cute, he painted her as twins.

Rockwell’s good friend and fellow Post artist, Mead Schaeffer, is at the very top left. His daughters, who posed for Rockwell are also shown: blonde Lee is just left of Norman, redheaded Patty, stands to the right of Tommy. And what family gathering is complete without a grandmother? Happy to pose for the role was none other than Grandma Moses, who started painting at 67. “When I knew her,” Rockwell wrote, “she was over 85 years old, a spry, white-haired little woman. Like a lively sparrow.”

Rockwell chose his subjects carefully. He wanted to create a scene both familiar and poignant, one that would resonate with families who had known recent (and lengthy) wartime separations.

Rockwell knew there were few days on the calendar as important as Christmas. Christmas, in his mind, is where family came together on every level. Here is a sampling of the Christmas Rockwell felt America knew and loved: 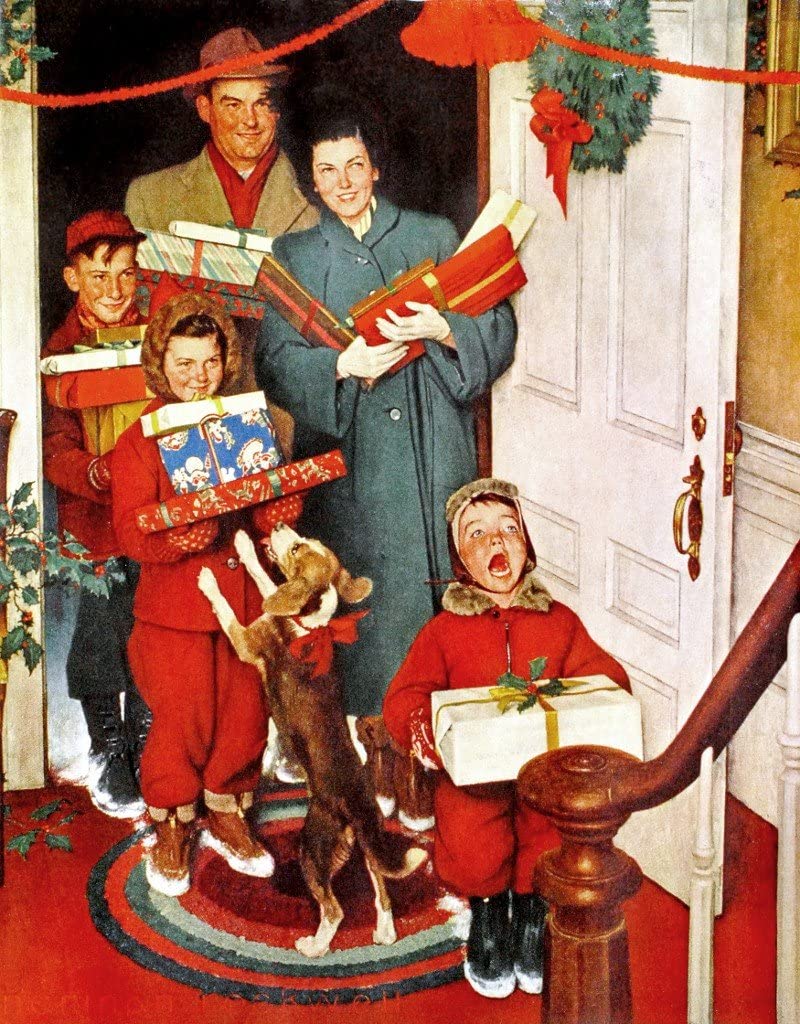 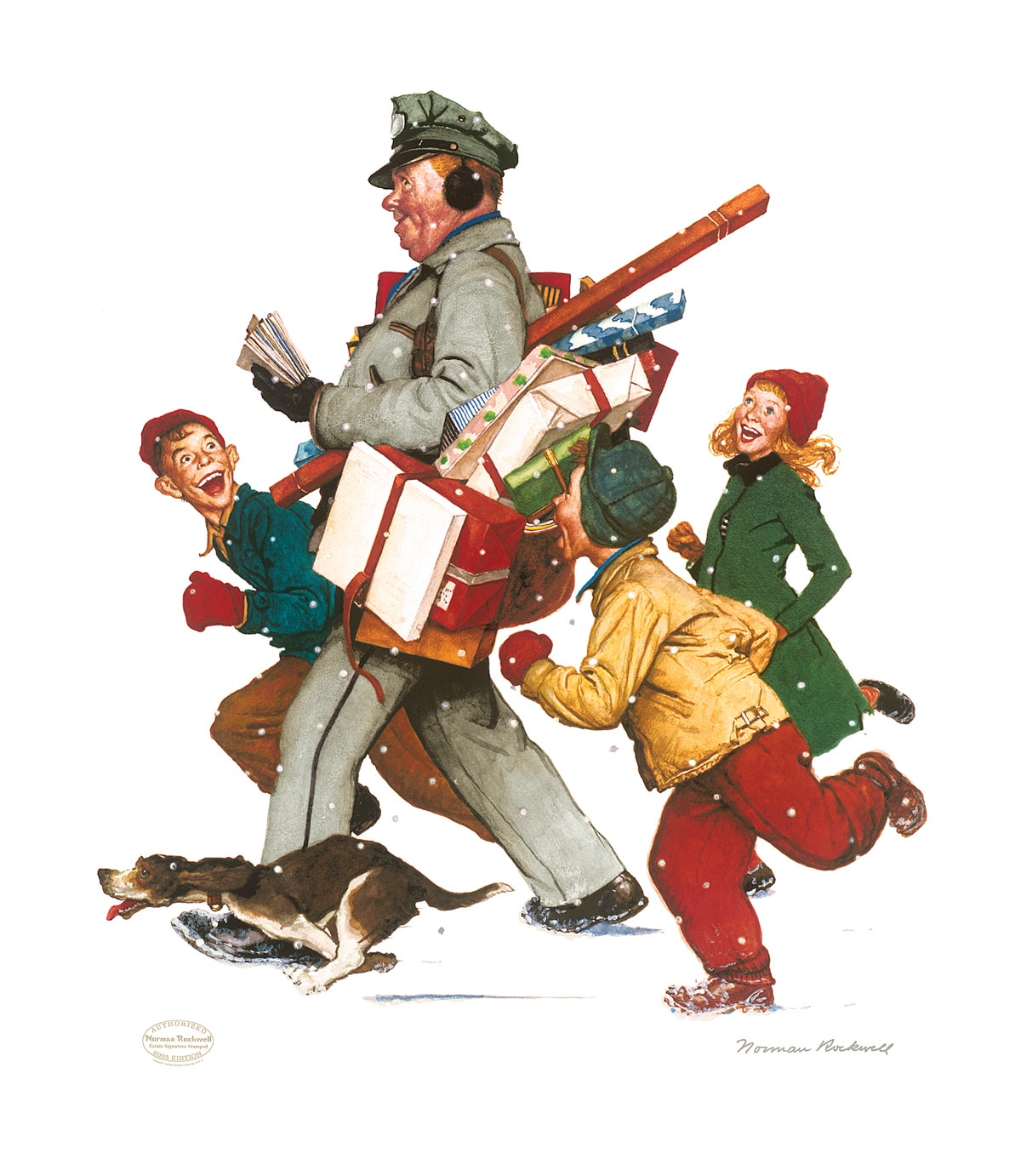 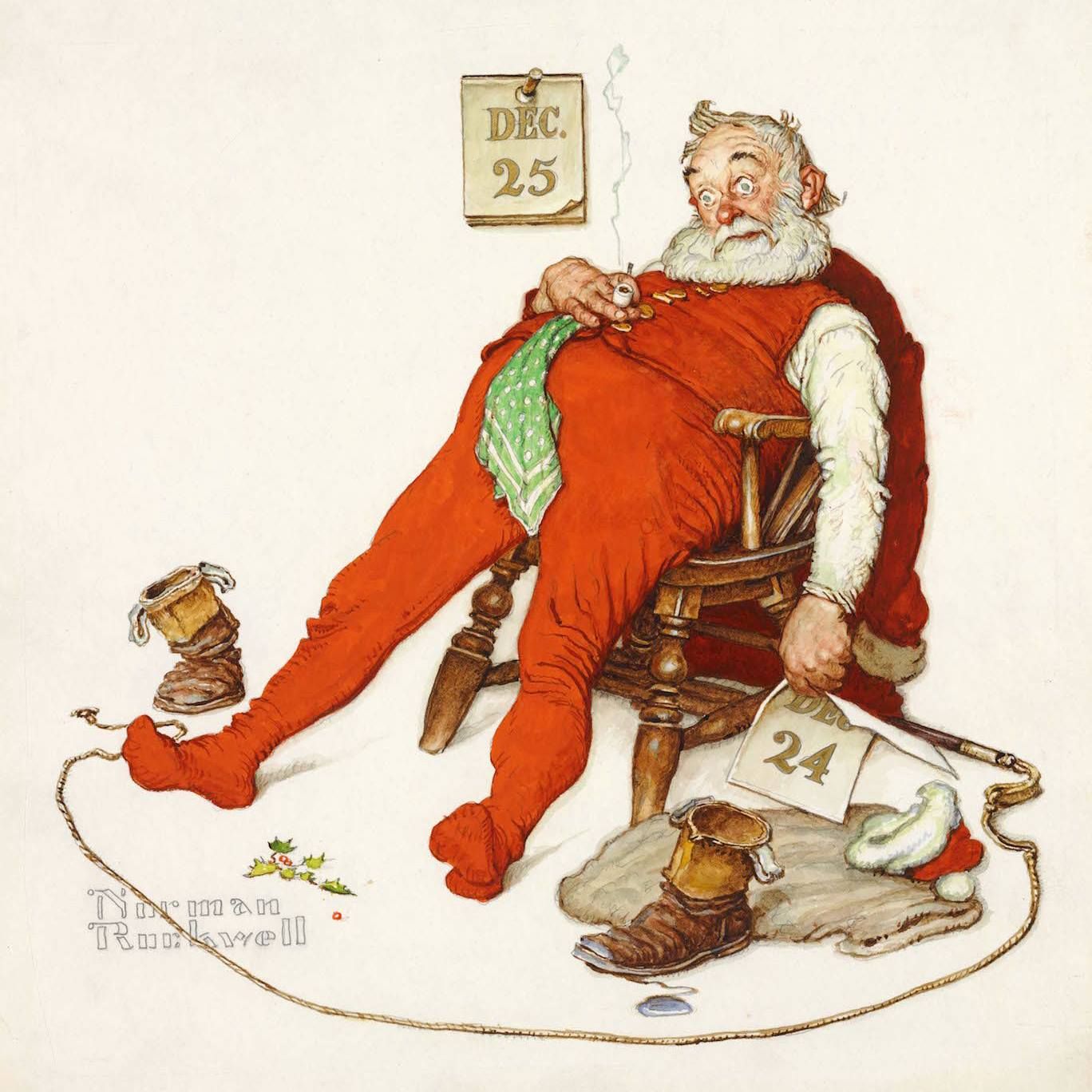 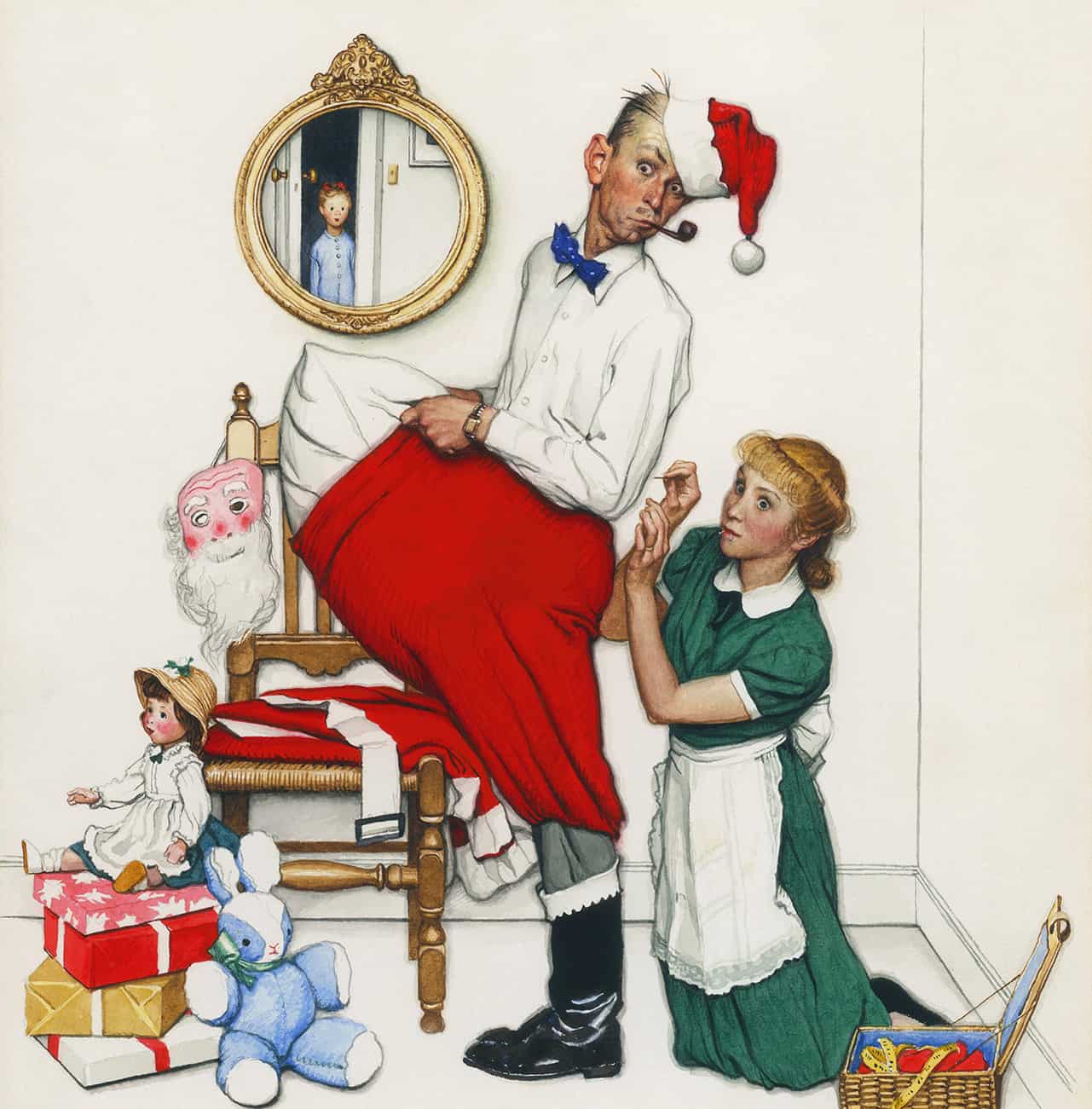 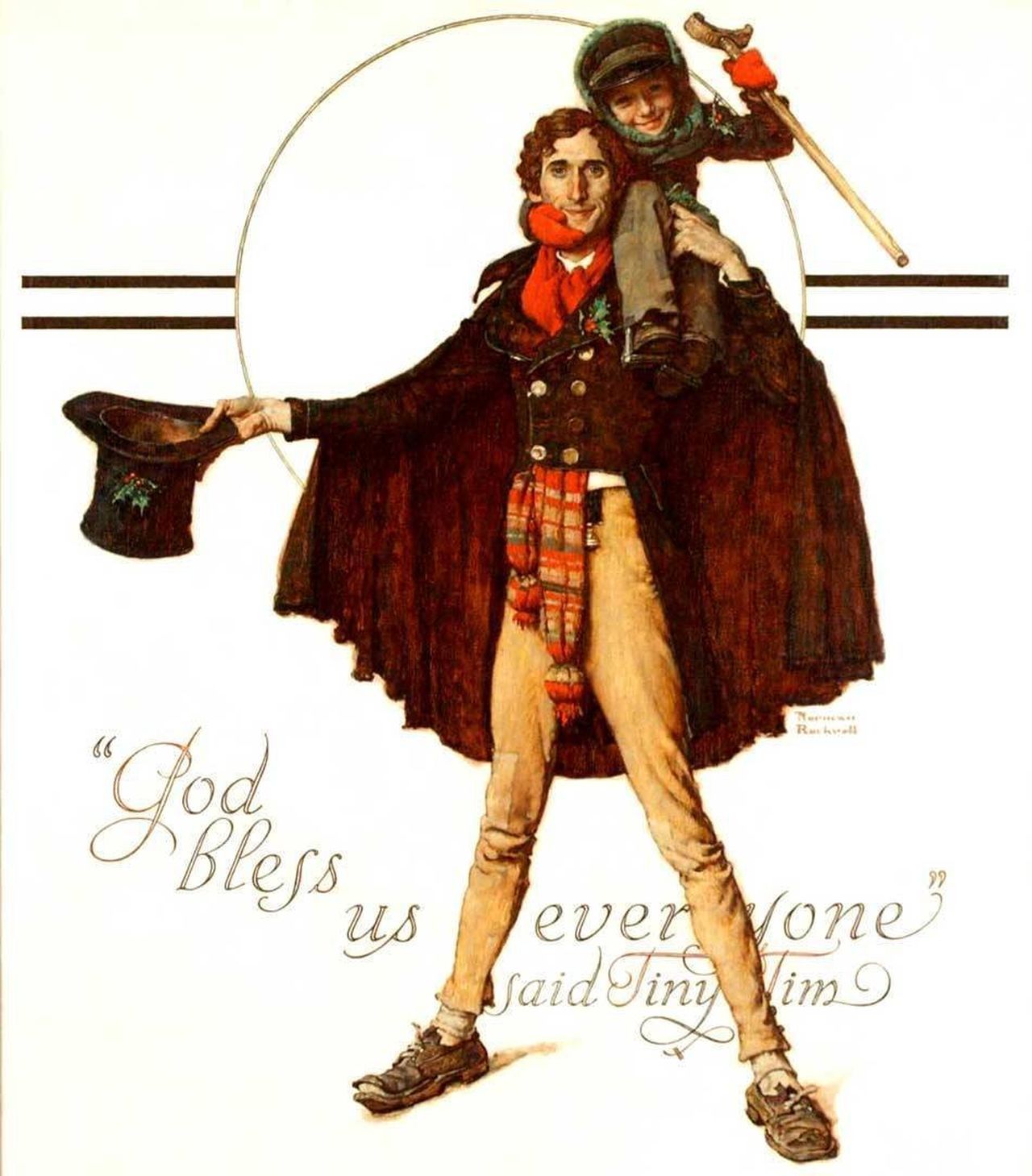 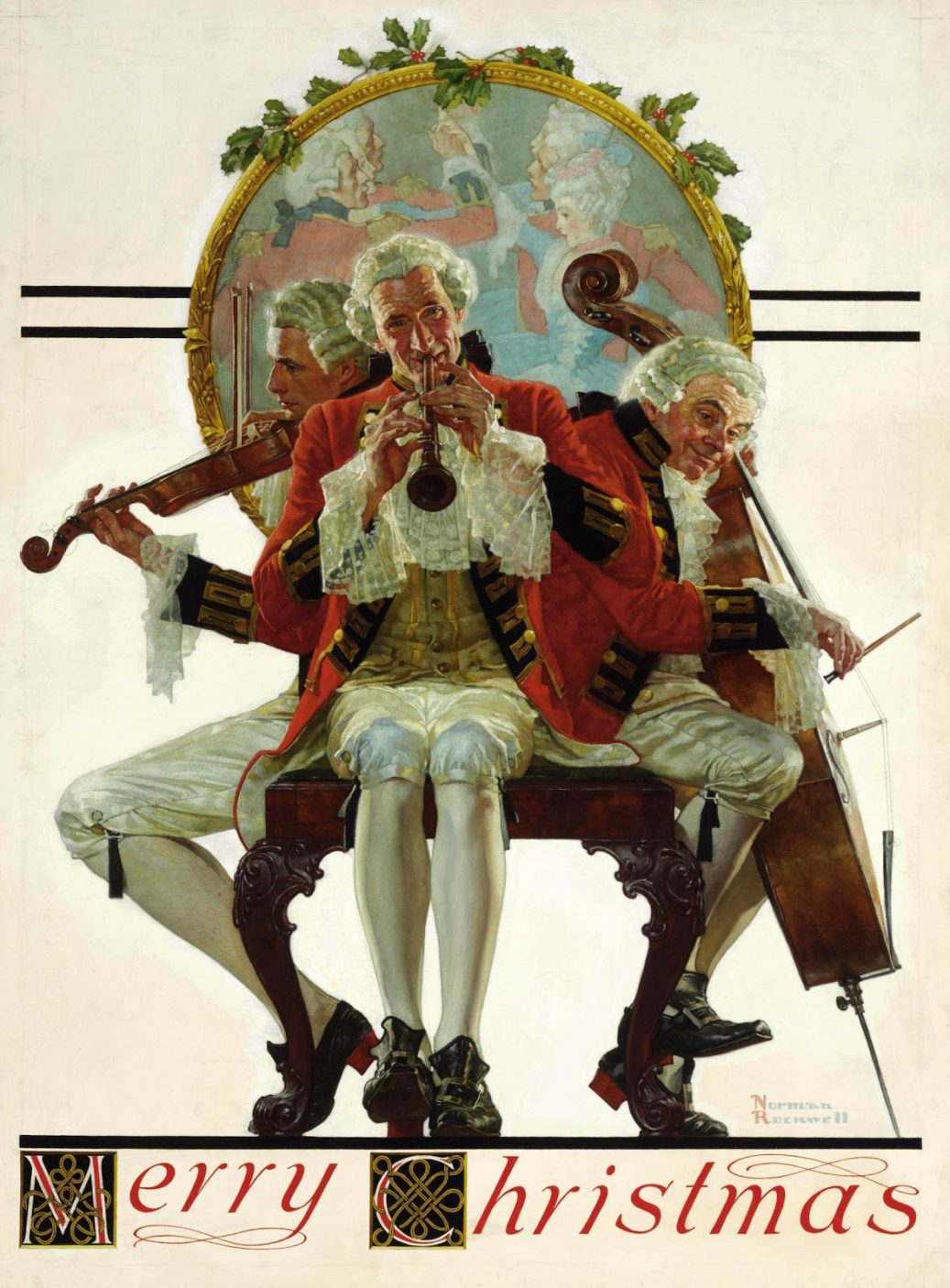 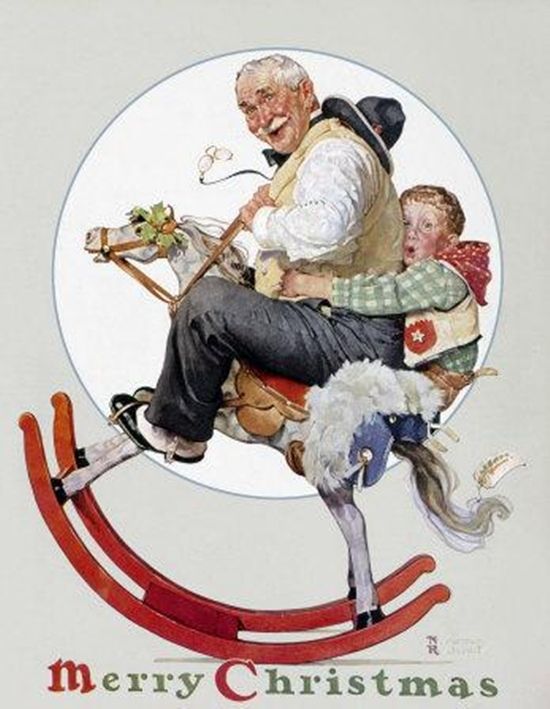