I’m sure this is exactly what the Puritans had in mind when they invented Thanksgiving.

The song comes from the Stan Freberg 1961 album titled Stan Freberg Presents the United States of America: The Early Years. It has been described (and voted on) as the best comedy album in American history.

The album featured an original book, score and a who’s-who list of veteran voice actors. In it Freberg satirized everyone in early American history from Washington to Franklin.

But nothing got attention – and criticism – like his sketch featuring the song Take an Indian to Lunch. 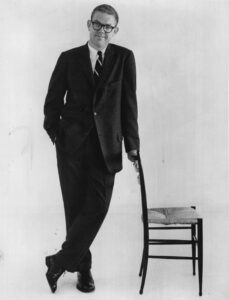 The legendary career of Stan Freberg allegedly began when he got off a bus in 1944 at the age of 17 after asking the bus driver to drop him off in Hollywood.

Freberg reportedly saw a sign once off the bus that said “talent agency” and walked in. The agency got him an audition with Warner Brothers and Freberg thus began his career as a cartoon voice talent working with the likes of Mel Blanc.

While juggling a wartime military assignment alongside his job, Freberg quickly made a name for himself for his vocal versatility.

Through the early 50s Freberg had worked on enough animation, film and musical projects that he found his way into movies, television and especially into radio.

In 1951 his began producing radio parodies of popular culture, focusing on musical hits of the time.

When Johnny Ray released Cry in 1952 Freberg skewered him with a parody he called Try (You too can be unhappy…if you try).

Ray was at first upset with the Freberg’s exaggeration. But then he noticed the parody actually helped the sales of his own record.

Freberg did not stop with Johnny Ray. He famously parodied Elvis, Eartha Kitt, The Platters and The Chords, and many others during the 1950s.

Freberg moved his comedy to radio as the replacement for Jack Benny and enjoyed a successful though occasionally controversial career.

~ The United States of America – Banned ~

In 1961 Freberg produced The United States of America Volume One: The Early Years, a theatrical based musical production written by and starring himself poking fun at classic American history.

Freberg went after Thomas Jefferson who in writing the declaration of Independence made all his S’s look like F’s, causing Ben Franklin to say “Life, liberty, and the purfuit of happineff?” while reading it.

The satire took on the landing of Columbus, George Washington trying to pick out boats to cross the Delaware and Betsy Ross complaining about snow brought in all over her “early American rug”.

But it was his Thanksgiving story of Puritan politicians looking to “win the Indian vote” by taking them to lunch (the now famous first Thanksgiving).

The album immediately was a sensation with listeners loving the humor but the media recoiling in disgust.

The playing of the album was banned in Dallas, Tucson, and Phoenix. A Boston radio station claimed to have received letters demanding the album be kept off the air.

Slowly radio stations all over the country claimed to be receiving anti-Freberg complaints, blaming the song Take an Indian to Lunch for being the most offensive.

Freberg was denounced by the John Birch Society. The Birchers, in fact, led the campaign of getting the album banned by radio stations.

The Daughters of the American Revolution advocated for a full-scale ban of the record with one of their members calling Capitol Records to say she would fight Freberg “to the death”.

The response to the album terrified Capitol Records.

They pulled promotional money from the album while at the same time the big radio networks of NBC and CBS refused to play it because it was “not up to programming standards”.

But there is no such thing as bad publicity.

Some radio stations did play it and, as before, the record was banned as the uproar went coast to coast.

Invited on the Tonight Show, Freberg was invited to perform the song when it aired after midnight.

Host Jack Parr asked, “Are you a hypocrite? How often do you yourself take Indians to lunch?”

“All right, listen” he said. “I invite any American Indians within the sound of my voice to come to my hotel at noon tomorrow, and I’ll take you to lunch.”

The following day dozens of American Indians did show up at the Algonquin Hotel.

Freberg quickly made lunch arrangements and then called his publicist, telling him to get hold of the newspapers to have them come take pictures.

In time, Freberg won out.

The album was a huge financial success and won two Grammy nominations.

The album even received the endorsement of the National Congress of American Indians, who claimed “We commend the use of political satire to help tell the Indian story and to promote respect and appreciation for all men’s values and aspirations”.

In 2019, Stan Freberg Presents the United States of America Volume One: The Early Years was selected for preservation in the National Recording Registry as “culturally, historically, and aesthetically significant” by the Library of Congress.

For legions of fans – which include the illustrious of Hollywood including Steven Spielberg and modern comedy legends such as Billy Crystal – Stan Freberg’s Take an Indian to Lunch has become a Thanksgiving tradition.

Families of all kinds sing the song or even use the album to help teach American history to their children.

It is doubtful such biting satire could be made today yet the song and the entirety of the album Freberg produced is still heralded as a classic of both American history and humor.