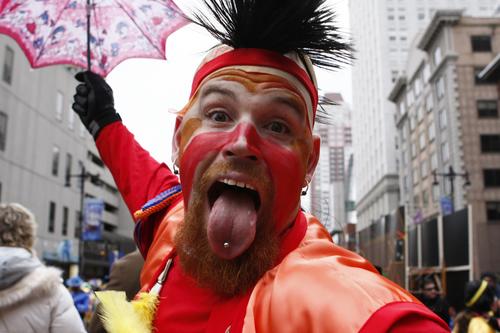 Imagine this: holiday celebrants by the hundreds take to the streets wearing all manner of costumes and masks, going door to door seeking treats in a yearly ritual of fun and frivolity.

The ancient art of “mumming” dates back to before Christ and is eerily described these days in the fashion of Halloween: bands of neighbors and friends going door to door in disguise seeking treats or money in exchange for casting out devils or evil spirits that might bring bad luck to a household.

Anciently this custom was associated with Saturnalia, a pre-curser of sorts to modern Christmas (or so the historians say). Mummers would use the occasion of the winter solstice to celebrate the end of the harvest year and to wish good fortune for the year ahead by engaging in a wandering roadshow featuring scripted folk plays that usually involved a main character returning to life from the dead. As they would sing, put on the short play in costume (often with women dressed as men and men as women) they would accept food, candies, nuts and treats from the homeowner in exchange for blessings of good luck for the future.

Like nearly all traditions associated with Christmas, “mumming” evolved over time.

Eventually the often comedic performances took on more serious themes, especially in the 3rd century as mumming was used by Churches to teach the gospel of Christ.

The mumming tradition seems to have had its beginnings in Great Britain, Ireland and other parts of Europe. While manuscripts exist of some mummer’s plays in the post-Christian era nothing remains from the time before Christ.

From mummers we get variants on what are considered now to be standard Christmas traditions in things like wassail, mistletoe and role reversal plays such as “The Boy Bishop”.

But through the course of history the tradition of mumming itself has wandered from Christmas to Halloween in one sense to New Year’s in another.

This tradition, like many others, arrived in America during the revolutionary era. George Washington kept the tradition as a New Year’s celebration in Philadephia as a strictly secular celebration of comedic rhyme and song featuring gun-toting revelers in costume who roamed the streets in good natured rowdiness.

Their “play” was an adaptation of the English St. George and the Dragon, mocking Washington in their celebration of the New Year.

That tradition survives today where the famed Mummers Parade gets national attention each year. Throughout the 19th century different laws were passed in an effort to quell some of the more rowdy activities (and even violence) that took place on the streets but the bans were never enforced.

The parade became official in 1901 and grew more elaborate and commercial throughout the 20th century.

Great Debates: Is Nightmare Before Christmas a Christmas Movie?
1 reply