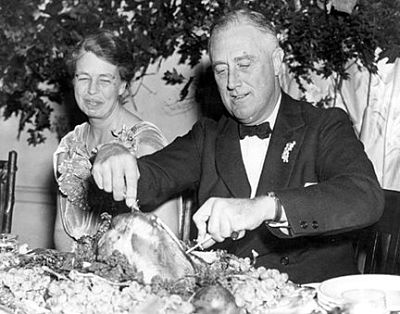 On Thanksgiving Day, November 23, 1939, Franklin Roosevelt carved the turkey at the annual Thanksgiving Dinner at Warm Springs, Georgia, and wished all Americans across the country a Happy Thanksgiving. Unfortunately, his greeting went unanswered in some states; many Americans were not observing Thanksgiving on the same day as the President. Instead, they were waiting to carve their turkeys on the following Thursday because November 30th in many states was the official Thanksgiving Day. Two Thanksgivings? Why were Americans celebrating a national holiday on two different days?

Changing the date of Thanksgiving seemed harmless enough, but in actuality proved quite controversial. It was so upsetting that thousands of letters poured into the White House once President Roosevelt announced the date change. Some retailers were pleased because they hoped the extra week of Christmas shopping would increase profits, but smaller businesses complained they would lose business to larger stores. Other companies that depended on Thanksgiving as the last Thursday of November lost money; calendar makers were the worst hit because they printed calendars years in advance and FDR made their calendars out of date for the next two years. Schools were also disrupted by Roosevelt’s decision; most schools had already scheduled vacations and annual Thanksgiving Day football games by the time they learned of Thanksgiving’s new date and had to decide whether or not to reschedule everything. Moreover, many Americans were angry that Roosevelt tried to alter such a long-standing tradition and American values just to help businesses make more money.*

As opposition grew, some states took matters into their own hands and defied the Presidential Proclamation. Some governors declared November 30th as Thanksgiving. And so, depending upon where one lived, Thanksgiving was celebrated on the 23rd and the 30th. This was worse than changing the date in the first place because families that lived in states such as New York did not have the same day off as family members in states such as Connecticut! Family and friends were unable to celebrate the holiday together.