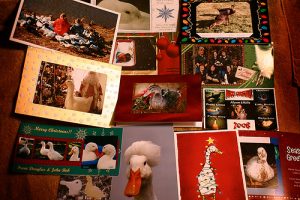 Many assume that with the rise of the Internet and the explosion of social media that older forms of communication have faded away. Indeed, letter writing, telegrams, and “dispatches” of the days of yore are now somewhat relic in nature and victims to technology.

But one old fashioned form of festive communication has stubbornly survived and even grown in the digital age: Christmas cards.

What was true then remains true now: Christmas takes the aspect of greetings to a whole new and more personal level. A hand written card of festive design remains popular for simple reasons.

Even a store bought card can be personalized in unique ways. In this sense, technology has actually aided in an explosion of the Christmas greeting trends. Adding photos, personal writings and other creations has been made easier because of technology. Last year major photo greeting suppliers such as Shutterfly, Peekaboo and Walgreen’s Photo all reported robust increases in their Christmas greeting card business.

Ditto for both the US Postal Service and for Hallmark. The Christmas card sending trend is indeed alive and well.

Having a “season” to send Christmas cards does make it advantageous. From Thanksgiving through New Years people have plenty of time to get them out.

Esther Gold of Fort Myers, Florida, begins working on her Christmas cards in September. She likes to send them out in small batches of two or three between Thanksgiving and Christmas. “I like to take my time with them,” she said. “I find it a great way to send part of me to those I love. Every card is unique. I like that.”

For Christmas lover Darlene Henry of Ohio Christmas cards are more than just mail. “We display our cards. They become part of our décor at Christmas. We love what they add to our home.” Darlene says.

Those are the same things other say about Christmas cards really being Christmas gifts. “I have reached an age where things at Christmas matter very little to me,” said 86 year old Helen Brenley of Sacramento, California. “But a Christmas card is something  can hold, and I can look at it over and over, and think of that person and how much I love them. There is nothing like a Christmas card.”

Some trends of Christmas card sending were never imagined more than 140 years ago when they took off in popularity.

For example, right here on My Merry Christmas.com the 13th annual Christmas Card Exchange is underway. It is an extraordinary event in that those who send cards to each other probably have never met and likely never will meet. They are friends on the forums – fans of Christmas one and all – and they send each other a lot of Christmas cards.

There are literally thousands of such exchanges on websites all over the Internet that pop up each year.

Christmas cards in the Internet age have also become a new form of charity. Each season we hear about a sick child or a family that has fallen on hard times and through the media efforts are made to lift them up through the sending of Christmas cards.

Chance Belkin of Nevada was a recipient of public generosity when his car accident was publicized after he was hit and severely injured in early December of last year. He spent Christmas in the hospital. News of his situation spread through social media and via the news – and Chance had to have help opening all the thousands of cards he received.

“Most cards were well wishes and I cannot tell you what those mean to me – to think that total strangers would reach out to me by the thousands to just wish me a Merry Christmas is incredible,” Chance said. “It has forever changed how I view Christmas and the power of simple gifts like Christmas cards.”

One thought on “Christmas Cards Remain a Durable Tradition”