The Mayflower came to America 400 years ago. The Mayflower brought pilgrims of a different kind – about 100 people who were committed to living lives of industry and independent thinking.

They were mostly Puritans. That made them very different than the rugged pilgrims of Jamestown, a group that had come to the shores of the New World many years before and had settled in the American south.

The Puritans were battle tested. They were weary of English rule, weary of fighting for their right to worship God, and weary of being told how to live their daily lives.

The Puritans were not motivated by money or the promises of riches in the New World. They were motivated by the right to simply live in their own way.

One of the most common issues at hand was something we think of as simple today: it was Christmas.

Listen to the Merry Little Podcast Episode of Christmas of the Puritans and Pilgrms:

Christmas for Puritans was complicated.  Many historians and most places you go on the Internet will flat out state that the Puritans just had no Christmas.

That is not true. It is not even close to accurate. In fact, it misses one of the most important American Christmas stories of all.

Much is made of the famous ban of Christmas by Cromwell in England and by the Puritan settlers of Colonial America.

It wasn’t just a case of the pious being self-righteous. England overall had a real problem during the “holy day” season.

Yes, there had been Christmas Church services for hundreds of years. But priests in those services read the Bible in Latin. It was not until the English under King James got the Bible in their own language that Christmas and how it was celebrated came under scrutiny.

Led by corrupt royal influences Christmas became a time of exceptional excess. Food, partying, drinking and even free sex permeated every class of society. “The Lords of Misrule” they called them and it included even members of the clergy engaging games of role reversal, cross-dressing and wife-swapping. It was not hard for the Puritans to know that none of that was sanctioned by God.

So as England fell into Civil War the fight over Christmas was connected to the larger fight with the Church of England.

Cromwell, who led the Puritan rise to power, ruled with an iron fist. He mandated the abolition of Christmas at every level.

When he was later over thrown it was discovered that not only did he not exactly live the righteous Puritan lifestyle he demanded of others but most people in England did not really abandon Christmas entirely either.

Cromwell, they had long ago decided, had just gone too far in banning Christmas altogether and the laws he enacted proved to be ultimately unenforceable.

~ Differences Between English and American Puritans ~

The famous Puritans of New England in America first landed in 1620. The year 2020 marks the 400th anniversary of their arrival on the Mayflower.

The American Puritans are too easily classed with their English cousins and Christmas is just one example of how different they were.

What gives? If they arrived in 1620, what was Christmas like for nearly 40 years among the American Puritans?

The truth is that Puritans in both England and America celebrated some form of Christmas. That was why it needed, in the view of Cromwell and others, to be banned.

While the Puritans of Plymouth arrived in 1620 the real influx of Puritan settlers did not happen in America until the 1630s during what they called the Great Migration. Every single one of those Puritans had some form of Christmas observance.

Did they follow the English customs of wild partying?

The purpose of Christmas, both inside the Church of England and its many off-shoots, was to teach the Nativity of Christ.

That was more the focus of the Puritan Christmas.

Plenty of records left behind show that Puritans marked Christmas with church services and traditions of song. It was a subdued, often personal and quiet family observance.

If Christmas fell on a work day – they worked. Then they celebrated Christmas. If it fell on a Sabbath Day, they worshiped and marked Christmas at church.

Much is made—too much it appears – of the more famous but sparse quotes about Christmas of the period.

But was Christmas really Bradford’s problem with what the men were doing?

No. The men were involved in games of chance. What Bradford’s concern was – as was the concern of most Puritans at Christmas – was that they not fall into the carnal and sensual patterns that had come to define what Christmas was in those times.

After all, New York City – known as New Amsterdam at the time – was settled by the Dutch. From the very beginning their settlement marked Christmas in almost savage ways. The Puritans knew that, saw that and wanted nothing like it. They were pursuing a more well-ordered life and society.

The Puritans didn’t have a problem with the pure celebration of Christmas. They just wanted nothing to do with the corruption of it.

Ironically, the very Christmas they wanted to avoid had already taken over the American south. It remained embedded as a yearly season of firecrackers, late night revelry, riot, and wanton excess for generations.

Records of “civil unrest” during Christmas and the 12-days that followed are plenty in the cities of Jamestown, Philadelphia, Charleston and even in New Orleans. 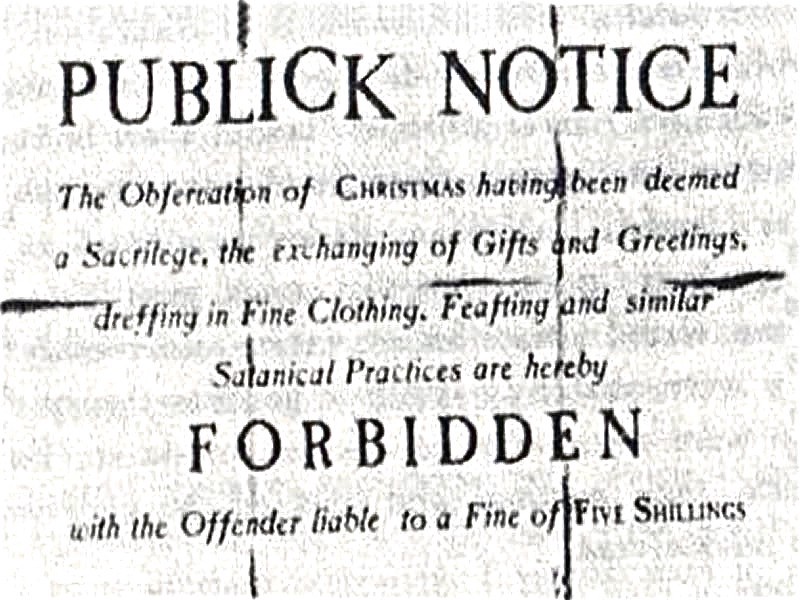 The Puritan representatives in Boston were trying to keep things under control.

Christmas survived the Puritan attempts to control it if only because banning in it Boston was no less effective or enforceable as in Cromwell’s England.

Historian Steven Nissenbaum, as part of his research for his book The Battle for Christmas in 1996, admitted:

“What I did not expect to find…was that the success of the Puritans in suppressing the holiday was neither complete nor long lasting…from the earliest years Christmas reinserted itself into New England society, first at its margins but then, well before the end of the 17th century and with a great upsurge in the middle of the 18th century in its very mainstream”.

Evidence of Christmas is found in Church records, printed music of the time, town records and personal journals. Christmas and how it was celebrated in New England has been debated and discussed ever since the 1600s, as shown in the clips below.