In 1918 the Spanish Flu pandemic hit in three waves – once in the spring, then again in the fall and once again in the new year of 1919.

The second wave of the flu was the most deadly, killing more than 195,000 people during that stage of the event.

In Western New York State a young mother of two came down with the flu in early November.

Her flu morphed into pneumonia, a common part of the Spanish flu sweeping the globe that ultimately infected 55 million people.

She was my great-grandmother. Her passing changed the course of our family history.

Some say the world and the conditions under the COVID-19 event of 2020 are completely different. And yes, it is a different flu strain and modern medical technology has advanced a great deal in 100 years.

But there are many similarities with that year we cannot ignore as we look to Christmas 2020.

This is an election year. The world is in no small amount of political turmoil. The economy now is more global and communication is nearly instant.

But the world in 1918 was equally upset. The height of World War I happened in the summer of 1918. Seeing no end in sight, American powers that be pushed for early Christmas shopping and asked children to forego sleds and dolls in exchange for war bonds from Santa that year.

Everything changed on November 11th when the armistice was signed. Soldiers began to return home from the war in a rush to get there before Christmas.

According to media reports at the time, they were bringing the flu with them. As the worst of the virus spread and killed, the rush to get soldiers home suddenly stopped. In fact, everything was disrupted.

During the Christmas shopping season of 1918 quarantines were everywhere.

In Elmira, New York, near to the home of my great-grandmother, an all-out “Quarantine Order” was published.

In part it read, “all theaters, churches and Sunday schools, public, parochial schools and kindergartens, public libraries and art galleries, pool and billiard rooms and bowling alleys, all places where public meetings of every name and nature including meetings of fraternal, social and labor organizations are held public and private dances, all public funerals to be discontinued, all business houses and mercantile houses in the City of Elmira to discontinue any special sales of any article or articles, that various hospitals restrict visitors, that people overcrowding street cars and that all persons refrain from visiting homes or other places where there is sickness.”

“Coughing and sneezing in public places” were to be considered a “misdemeanor in the future” and would be “punishable by law.” 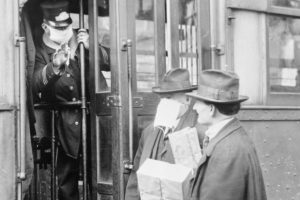 Hotels and public halls were converted into make-shift hospitals. Families were quarantined in their homes for weeks at a time.

Public events such as concerts, rallies, meetings, and conventions were canceled. The dead and the dying created an overflow situation for local funeral homes and newspapers as far away as Philadelphia advertised for both embalmers and coffins to service the city of Elmira, New York.

Weeks after the order was imposed it was lifted but the 21 churches in Elmira refused to accept permission to open on Sundays.

When it was learned that public schools would re-open the churches protested, saying it was too soon.

The flu lingered in Elmira into mid-December and beyond.

An article from December 13th in the Star-Gazette said the “Board of Health realizing Elmira is not free of prevalent disease orders that all homes having influenza patients be quarantined two weeks”.

My great-grandmother died on December 12th.

Her funeral was a very small, private affair that was noted in the paper. Few attended out of fear of getting sick.

Christmas for her family just was not celebrated that year. That was not because my great-grandmother died. They just did not want any further illness.

This was the common thinking. Families gathered in very small groups for Christmas 1918.

What could the lessons of 1918 teach us about what’s possible for Christmas 2020?

The issues that will affect things first are economic.

As of this writing (early March 2020), parts of manufacturing in China have been shut down for three full months. Already in the media we have seen warnings of shortages of goods ranging from pharmaceuticals to iPhones.

Christmas goods – things like Christmas lights, artificial trees, and decorations – are predominantly made in China.

The tradeshows are traditionally held in January and February of each year where orders are placed. Those goods typically ship in the period between May and July, targets that will clearly be missed this year.

“Prices are going up,” says Wayne Tollefson, a wholesaler of Christmas lights who distributes via major retailers. “We have had our early orders canceled and our late orders will be arriving later, if at all. This will be a very different selling season for us.” He notes with no small amount of frustration that their staffing will need to be reduced as a result.

Analysts are not yet talking about projections for the Christmas shopping season.

“We just came off a record season, especially online” a spokesperson for the National Retail Federation told MyMerryChristmas.com. “It’s too early to project anything because we do not yet know what will or will not be affected. That will happen in the months ahead. Is this just a blip in the flow of goods or will it extend into later in the year? We just don’t know yet.”

Complicating matters is the still unknown characteristics of Coronavirus. In some places it is being noted that people who have had the virus are being re-infected after recovering.

The implication of that could mean this strain of the virus may not just dissipate over a season or even come in waves, as the Spanish flu did in 1918. It could be around for a while.

That has some wondering what social life will be like for Christmas 2020.

Can there be Christmas concerts? What about Christmas parades? Will children be able to sit on Santa’s lap? Can malls host the throngs of shoppers?

Experts are torn over whether COVID-19 will wane in the warmer weather months. While some science backs the idea they just do not know enough about this current strain to confidently say a change in seasons will help.

The medical community is bracing for how the Coronavirus may expand in the southern hemisphere, which is approach its winter months.

The reality that Coronavirus will still be around come Christmas is yet unknown.

Will the coronavirus now ravaging China ever go away? Or is it here to stay, causing ongoing misery?

The answer depends on two possible outcomes: China, the epicenter of the outbreak, gets the virus under control — or it doesn’t, and permanent new epicenters of infection spring up in poorer, more desperate nations.

Time is of the essence, according to leading infectious disease experts. Since the virus was first identified in December 2019, the number of casualties has skyrocketed. While the rest of the globe has effectively isolated the world’s most populous nation, such extreme measures can’t go on forever. The virus is now in 70 countries and each is struggling now to contain it.

It is increasingly clear this coronavirus could join the many other viruses, such as chickenpox, the flu and common cold, which forever circulate the globe, seasonally waxing and waning – until medicines or vaccines save the day.

“Once you get critical mass, it is very hard for tried and true public health approaches to make an impact,” said Dr. Robert R. Redfield, director of the U.S. Centers for Disease Control and Prevention.

With each passing day bringing news of greater infection to further corners of the world the likelihood that Christmas 2020 will be different becomes a reality.

“Make your plans now to stockpile the Christmas cheer,” Dr. Laurie Williams told us. “Get healthy, practice better hygiene and be flexible. We don’t know if we will have this under control by Christmas. But we do know that each home will have to be prepared in new ways and that begins right now. Life will go on. Will it be different? Not really. Christmas will still be Christmas. You can make a body sick. But you can’t stop love.”