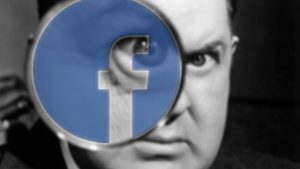 Facebook knows better than Santa what everyone in your house wants for Christmas – and they are going to make sure you will know what’s on their wish list.

It’s a whole new world of creepy advertising. And you made it all possible.

When you signed up for Facebook you granted the world’s most prolific website entry into nearly every corner of your life.

They know who you are, where you work, when you were born, where you went to high school and even who your favorite sports teams are.

They know every one of your friends. They can connect you to nearly all of your family. They can likely figure out who you ex is, who you voted for, and where your last and next vacation will be.

Facebook knows your likes and dislikes. They know the movies you watch, the songs you listen to, the websites you frequent online, and even the kind of pizza you like to order.

So don’t think for a second they don’t know what you want for Christmas.

Expand those scary thoughts to everyone who lives in your house (or who will be visiting your house for Christmas – yes, they know that, too).

Now, if you were Facebook, what would you do with all that information?

Well, you would make money – huge, massive, ginormous, and obscene amounts of money.

Coming to your Facebook – and your Amazon and your Netflix and your Walmart and your-whatever-place online where you spend money – are ads that target you more intimately than ever before.

Here is how it works: Let’s say you and your significant other live in a home with, oh, two teenage dependents – a boy we’ll call Junior and a girl we’ll name Missy.

You are a busy person without much time for Facebook. You check it maybe once a day, likely at night before you go to bed – if you check it at all. You might look at it on your desktop before shutting down your work email for the day, or maybe you’ll check it out on your Kindle when you’re on the throne. (Admit it, you do it – lots of people do, gross as it is).

Junior and Missy are all about their phones. And they are power users. Not so much with Facebook but on Instagram (which is owned by Facebook) and on Snapchat they are ever present. Ask them to call in a pizza on that phone and they will protest. And shut down the wifi with these two kids of yours and the world comes to an absolute end. From morning to night they are on their phones without ceasing. Believe it.

Your significant other is a social media junkie too. He or she pursues interests, reads the news, does the bank and spends the money – all mostly on a device.

This very real scenario is Facebook’s playground. All that activity online via whatever kind of device gives them access to you and everything you know and love and hate and admire and want to make happy for Christmas.

When they won the World Series last October Junior couldn’t stop talking about it. He changed his profile picture to the Cubs logo, talked it up for weeks with his friends and follows the Cubs via his personal settings for the MLB app he’s got on his phone.

Somewhere along the line he tells a friend or clicks on an ad or likes an article about a Sony PS4.

And Facebook has got your back. Between now and Christmas, you’re going to see everything Facebook can sell that matches what Junior likes. Ditto for Missy and for your
Significant Other.

Don’t have time to make a list? No worries – just take a serious gander at your Facebook ads.

If they creep you out and give you the sense you’re being stalked there is a good reason for that. You are!

Yup, Junior is going to find out about your secret Christmas wish for that new Justin Timberlake album.

And Junior is going to say, “What’s up with all these JT ads on Facebook” and when he does, you’re going to “like” it.

And he/she is going to laugh.

She was going to get you socks.