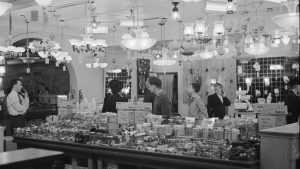 The news has been decades in the making: iconic retailer Sears is closing its doors for good this year. The effect of their loss, like that of Toys R Us, will not matter one bit to consumers. But the loss of Sears to Christmas history is worthy of note.

Once upon a time Sears was the yearly watch-word for Christmas shoppers and Santa dreamers coast to coast. Kids everywhere marked the day when the Sears Christmas Wishbook would show up in the mail.

Generations took their children to Sears to have their pictures taken with Santa.

It was the place to get the latest in Christmas tree fads.

From decorations to gifts, Sears was the destination especially for remote consumers that could depend upon their catalog services to fill their stockings.

After years of enduring criticism and bad press, the American original retailer is finally getting some love in the media as it closes its doors. Most are calling Sears “the Amazon of its day”.

The comparisons are entirely inappropriate. 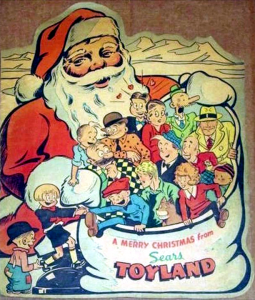 Sears did far more than Amazon has ever accomplished and faced obstacles Amazon is yet to encounter.

Sears was a byproduct of late 19th century marketing. It began as a seller of watches and jewelry that expanded into a thriving catalog business. The 500+ page catalogs Sears produced offered by-mail access to thousands of products that folks in remote areas just couldn’t find in local stores.

But unlike Amazon, Sears accomplished great growth in the face of stiff competition. Many others were in the business of mass merchandising through catalogs. Sears just figured out how to do it better than anyone else – opening massive mail order facilities in different areas of the country while developing delivery systems nobody else had.

Sears opened their first retail stores in 1925. The changing landscape of American retailing was driven by the automobile – and there were simply more customers to be had than Sears’ catalog business in rural areas could offer. The first store opened in the Sears Chicago mail order facility and was an immediate success.

Sears expanded rapidly, opening more than 27 by the end of 1927 and more than 400 by 1933. In comparison, Amazon didn’t open their first stores until 2016, nearly 20 years after opening online – and Amazon has remained a tepid bricks-and-mortar retailer.

Why? Competition. Sears had no fear of competition, however. Sears played to expanding markets where department stores like Macy’s already and a foothold and then gleefully forced their catalog operations on every segment of their business.

Sears was expert in developing new products and establishing their own brands. Kenmore debuted in 1913 and remains a nameplate for quality appliances. All State was first branded for Sears-made automobile tires and was used to expand into the insurance business in 1931.

Sears would go on to make such legendary brands as Die Hard and Craftsman – something Amazon has not achieved in the least.

Sears catalogs and stores offered everything from cars and houses to clothing, tools, appliances, toys and candy. Their stores were destinations for Christmas shoppers out and about and their catalogues were found nearly everywhere.

Sears was at the forefront of nearly every new retailing idea – from self-service merchandising to Black Friday discounts.

But by the 1970s Sears was an outdated retailer who started to falter. How then did it last until 2018?

It lasted because it was diversified in so many different areas. Sears held on to their beloved brands until 2017. And their real estate holdings are still unmatched by companies anywhere – including Amazon.

Sears failed first to respond to late-20th century big box retailers like Walmart and Target and were late to the table online with the likes of Amazon. Sears had grown just too big and, frankly, too arrogant to survive against retailers who brought change and innovation.

But for generations Sears was Christmas coast to coast. And that will be mourned this Christmas season as the lights go out at Sears.

Amazon, for as much as it dominates the American retail marketplace these days, is no Sears. They do not have competition. They do not give “shoppers” the buzz of a bustling shopping season or the anticipation of great seasonal discounts. The Christmas experience on Amazon pales in comparison to the Christmas experience of old at Sears and other retailers of America’s past.

Jeff Westover
Father of 7, Grandfather of 7, husband of 1. Freelance writer, Major League baseball geek, aspiring Family Historian.
Toys R US commercials are still on Swedish tv. They are somewhere.......
It's an interesting article on the history of Sears relationship to Christmas. However, I'm not what the purpose is in bashing Amazon throughout the article. The quote, "Most are calling Sears the Amazon of it's day" is pulled out of nowhere. Who is calling Sears the Amazon of it's day and what have they done to deserve your criticism. Comparing the two is like comparing apples to oranges, completely different companies in completely different eras, both doing what they do very well and filling the needs of consumers in differing ways, but appropriate for the times. Sears did not keep up with the evolving marketplace and companies like Amazon gobbled them up, just like some other, yet-to-be-named company will do the same to Amazon some day in the future. Sears deserves it's place in history as a Christmas icon - I sure remember being a kid in the 60's and 70's and waiting for the arrival of the annual Wishbook. I also appreciate what Amazon has done in the past 15 or so years, making shopping much easier for all of us and making just about everything in the world accessible with the stroke of a few keys. Again, like the tribute to Sears but what has Amazon done to the author to deserve the bashing it gets?

Aren't we saying the same thing in saying that Sears and Amazon don't compare? Yet here it is all over the media comparing the two:

Yes I agree with your premise that they are not comparable - my only issue is with the negative tone with which you portray Amazon throughout the piece. I think they are a great company (just as Sears was in its heyday) that obviously (based on the enormous popularity and growth of the company) fills a huge need in our consumer-driven society. They have filled that need better than anyone.

I don't think I was too harsh on Amazon except to say their Christmas experience is lacking. I just think the comparisons are ill-advised. Truth be told, I think it is way too early to be talking about Amazon and what they have or will accomplish.

I will miss Sears, the Wish Book was a big part of Christmas in our house. My parents had many Kenmore products and my stepdad liked his Craftsman tools. I am not an Amazing shopper. I prefer to go to Sears or local stores. America is losing out on a great store and icon. Michele
I LOVED Sears and the Sears Christmas catalogue. Most of the stuff in the wishbook was beyond my family's price point, but it was fun to dream! However, Sears was not the iconic Christmas experience in my hometown. That was a local/regional Department Store that did the most magical Christmas village a kid could experience. It was pure legend. They also had the annual Christmas parade. There was no large display of toys, but rather a Christmas setting that everyone could enjoy, free of charge and minus the the pressure of actual "stuff" to purchase. They also featured a lunch with Santa that every elementary school in town had their appointment with, and it did not matter whether your parents could afford it or not. The tickets were distributed and no one knew who paid and who didn't. Now THAT was the Christmas experience I will forever remember!
I really enjoyed reading this. Love the photo of the house for sale under $2,000. Wow!
Sears should release one more wish book just for old time sake