The relentless encroachment of Thanksgiving on Christmas has gotten out of control. It begins in early October and does not let up until late November. The pervasiveness of Thanksgiving is so all-encompassing that hardly anyone puts Christmas lights over their pumpkins anymore.

In fact, the statistics of Thanksgiving versus Christmas are telling. Thanksgiving is the much bigger holiday if you believe the numbers.

According to The Vacationer 54 percent of Americans will travel for Thanksgiving. Only 23 percent will hit the road at Christmas.

Christmas is a beloved holiday celebrated by 85 percent of the population.

But Thanksgiving is even more celebrated with 98 percent of all respondents claiming to celebrate the day.

~ Historical Facts of Thanksgiving and Christmas ~

How is this even possible?

After all the history of Christmas is much more extensive. The first “recorded” Christmas celebration dates back to the year 336 and most historians claim it probably goes back much further than that.

Even the earliest claims of the first Thanksgiving date to only 1621.

And even those details are all debated. Experts are saying now the odds are pretty good that Charlie Brown likely was not even there for that first Thanksgiving.

Yet today there is evidence all around us that Christmas is falling behind Thanksgiving in many categories.

For example, only 36 percent will be putting up a real Christmas tree this year (See this link). Yet more than 93 percent of people at Thanksgiving will eat a real turkey.

Thanksgiving has so overtaken Christmas that songs like this can be heard in October, even before the Halloween candy is passed out:

~ The So-Called War on Thanksgiving ~

The all-absorbing presence of Thanksgiving has led some Christmas celebrants to strike back.

In fact, some are actually calling it a War on Thanksgiving.

They claim that Thomas Jefferson, of all people, led the charge in the War on Thanksgiving. Jefferson was completely uncomfortable with the entire idea of Thanksgiving.

He claimed the calling of fasts and feast days to recognize God were quite possibly a violation of the separation of Church and State.

And yet, while Governor of Virginia, Jefferson did sign a proclamation declaring December 9th, 1779 as a day of “Thanksgiving and Prayer”.

Jefferson took a politician’s approach to explaining it all:

“I consider the government of the United States as interdicted by the Constitution from intermeddling with religious institutions, their doctrines, discipline, or exercises…Certainly no power to prescribe any religious exercise, or to assume authority in religious discipline, has been delegated to the general government. …But it is only proposed that I should recommend, not prescribe a day of fasting and prayer.”

That explanation was good enough for every president since Washington (including Jefferson). Each has called Thanksgiving as a national day of prayer and recognition of God.

Christmas, of course, has never enjoyed such a declaration.

In fact, Christmas gets accused of crossing the boundaries of Church and State all the time.

Thanksgiving gets a pass – every year.

Where does all this controversy come from?

Blame it on the Puritans. They came to America and first celebrated Thanksgiving and then famously banned Christmas in 1659.

Christmas has struggled to recover ever since.

In fact, during the 19th century an effort was made to shore up Christmas in the eyes of a holiday weary public.

In 1823, “A Visit from St. Nicholas” was published under anonymous authorship in a New York Newspaper. It was then re-published every Christmas until the end of the century.

In the 1840s it was discovered to have been penned by Clement Clark Moore, part of a cabal of closet Christmas freaks who wanted to calm the riotous celebration on New York City streets – no doubt fueled by turkey overindulgence at Thanksgiving – by bringing a gift-giver to Christmas celebrations.

They ploy worked. Moore’s poem, coupled with Charles Dickens (also part of the Christmas cabal) and his story A Christmas Carol, catapulted Christmas to insane new heights of popularity.

But Thanksgiving did not sit around waiting to enjoy some love.

In 1843, curiously around the same time as A Christmas Carol came out to rave reviews, Over the River and Through the Wood was penned by Lydia Maria Child, who joined forces with Sarah Josepha Hale in getting Thanksgiving declared a National Holiday.

The two revolutionary women were aided by the likes of Henry Wadsworth Longfellow, whose fictionalize tales of the first Thanksgiving led by his own ancestors made such an impact on pop culture that it became a fad to not only celebrate Thanksgiving more but also to claim pilgrim heritage.

It was all too much for President Abraham Lincoln, who gushed over Thanksgiving to the point that he made it a national holiday in 1863.

Christmas did not get the same kind of recognition until 1870.

The declaration making Christmas a holiday did not even mention God. There was no gushing over it. Christmas was made a holiday so that federal workers could get the day off. That’s it.

Christmas, you see, has long suffered in the shadow of Thanksgiving’s bright light.

Thanksgiving has so many invasive elements denied Christmas.

Take, for example, the Thanksgiving Day parade. You might argue that there are lots of Christmas parades and you are correct.

But is there one nationally televised parade in New York City for Christmas?

No, that annual commercial-filled telecast is reserved only for Thanksgiving and features drunk news anchors and past-their-prime celebrities gushing over balloons and marching bands.

And in the biggest slap in the face to Christmas ever they put Santa Claus at the very end of the parade. It’s shameless.

Football is a Thanksgiving pastime and these days even Christmas gets a few games. But does Christmas get the Dallas Cowboys, famously known as America’s team? The Cowboys have played every Thanksgiving Day since 1966.

Who do we get on Christmas? The Cleveland Browns.

There is a reason it is called Black Friday. 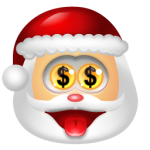 Thanks for seeing the humor. I have to be careful because some people out there don't GET IT.
Toggle signature
Santa Update | Christmas Hall of Fame | Santa Trackers | MyMerryChristmas.com
Reactions: made582
G