The 18th century Christmas is kind of the ugly step-sister to Christmas of the 19th century. The Victorian Era of Queen Victoria, Charles Dickens and other Christmas superstars seems to hog the holiday limelight.

Yet we could not have had the 19th century Christmas without some key movers-and-shakers in the 18th century.

It was a critical time in world history.

The British Empire had so expanded to nearly every corner of the globe. Their power and influence were legendary. But even England was recovering a bit from the century before.

Christmas took a beating in the 1600s. The British Civil War had Christmas at its center. Oliver Cromwell and his Puritan backers hated Christmas for very good reasons.

Christmas in Great Britain and in the Church of England had become a festival of not only great excess but also of riotous behavior.

Something had to be done about it.  Fortunately, the 18th century saw their fair share of Christmas influencers. Many of them, especially in the world of music, came from Germany.

Christmas barely survived the rocky battles of the 17th century. The Puritan bans on Christmas in both England and the New World made the traditional celebration of Christmas difficult in places.

That was not because the Puritans did not like Christmas. The Puritans celebrated the birth of Christ as much as anyone. They just did their celebrating in worship – which included a fair amount of music. Their influencers in the 18th century included: 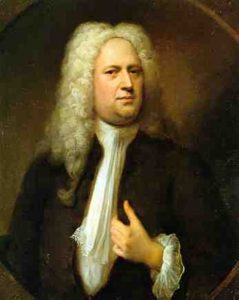 George Frederich Handel – Author of Messiah, recognized these days more at Christmas, Handel actually wrote the music for Easter. All of the lyrics come from Biblical texts, the most famous from Isaiah who wrote some 750 years before the Birth of Christ “for unto us a Child is born”. In the centuries since the music of Messiah, especially the Hallelujah chorus has become a Christmas standard.

Johan Sebastian Bach – Bach’s name is known among classical music lovers and every child who has ever had to endure piano lessons. Among his most famous work is his Christmas music, which has held large influence over composers ever since he lived. Bach’s Christmas Oratorio is more than 3 hours long and was written in 1734. It still receives continual play in Christmas concerts held each year.

~ Movers and Shakers of the 18th Century Christmas ~

Queen Charlotte – England’s Queen Charlotte was Queen Victoria’s grandmother. She was German born and became a British royal when she married King George III in 1761. The mother of 15 children Charlotte was famous for her Christmas celebrations at home. She is credited with bringing the first Christmas tree to Windsor Palace in the 18th century and for importing all of her German Christmas traditions to England.

George Washington – As a Virginian, George Washington was a Southerner. Southerners, from the first colonial settings at Jamestown, celebrated the traditional English Christmas in the sense that Christmas was a day of feasting and gathering among the aristocratic society, of which the Washingtons were  a part.

The more common classes celebrated with the English traditions of mumming, fireworks and mass gatherings. Washington in particular was famous for his eggnog and for lavishing gifts on even his slaves.

The Christmas of 1777 at Valley Forge is perhaps the most well know Christmas in the life of George Washington. Christmas, in fact, saved him from giving up.

Benjamin Franklin – Franklin was famous for his love of holidays and celebrations. Born into a Puritan family in Boston Franklin likely didn’t know many Christmases as a child outside of placid church worship. However, as an adult publisher Franklin was known for his Christmas opinions. Based in the sometimes raucous city of Philadelphia, Franklin famously said, “How many observe Christ’s birthday! How few, His precepts!” Franklin wore many hats, including that of inventor of the stove and tinkerer of electricity. A famous story was shared of a Christmas turkey Franklin attempted to cook by electrical means, thinking it might result in a more tender bird.

For Christmas 1750 Franklin took two large jars of electrified water, called Leyden jars, after the university in Holland where they were invented. These were larger and more powerful than he normally used, containing “40 vials of the stuff”. He later wrote that he held in one hand two united wires, and in the other a chain connected to the outside of the jars. Things did not go as planned. Witnesses saw a “great flash” and heard a “loud crack”. Franklin was “knocked senseless,” and experienced violent shaking.

John Adams – The 2nd President of the United States never seems to get much attention standing in the shadows of Washington, Jefferson and Franklin. But he was a man of exceptional world experience, education and political theory. His family’s Christmas traditions growing up were rooted in his Puritan heritage and not much is known of how much those beliefs moderated during his younger life. However, he married young Abigail Smith, the daughter of a Congregational minister and from that point forward in his life Adams’ views on religion and Christmas moderated even further. By the time he became president the Adams became the first presidential couple to occupy the White House and the first to throw a Christmas party there. The social events of the Adams administration set the stage for presidential Christmas celebrations for decades to come.

Of course Christmas of the 18th century resembles little of the Christmas we celebrate today. The New World was still very sparsely populated and the American Revolution did not end until the 1780s. Everything from the media to merchandising was in an infant state.

But that is not to suggest that the celebrations of Thanksgiving and Christmas were not held.

They were clearly held by both traditions of the generations who came before in the New World and by those who continued to come over from the Old World.

We know that division on the subject of Christmas was in force. We know in the South of the United States the Christmas celebrations went for a full 12 days after Christmas and featured street festivals that sometimes got out of hand.

We know Christmas was celebrated widely but more privately in the North of the United States. The so-called Puritan ban of Christmas was not really enforced and most ignored the ordinances against, as had happened years before in England.

We know the Yankee Christmas began with a hearty celebration of Thanksgiving. We know the harvest was a theme celebrated right through Christmas. We know eggnog was a winked-at tradition in the Northern States and it was considered just another “peculiar institution” in the Southern States.

We know the character of Santa Claus was not widely known yet in the 18th century but that the celebration of St. Nicholas was alive and well in Europe and in some parts of the United States, by those who brought his tradition with them.

We know Christmas trees were in the United States as early as the 1740s in predominately German and Dutch settlements in Pennsylvania. We know George Washington was informed of the tradition of Christmas trees because he knew the enemy in the Battle of Trenton was celebrating Christmas with them as he crossed the Delaware.

We know the prominent personalities of the day – many listed above – helped to influence the celebration of Christmas well into the 19th century.