Fireworks at Christmas are not a thing many people think about. For many folks, Christmas is long associated with snow, stockings and jingle bells. None of that seems to fit with the colorful summer traditions of fireworks. But the truth is that without Christmas you likely would not celebrate Independence Day with fireworks.

For hundreds of years fireworks have had a long association with the celebration of Christmas around the world.

It is said that fireworks originated in China nearly 2000 years ago. Chinese alchemists mixed together saltpeter, sulfur and charcoal and created a crude gunpowder, according to the American Pyrotechnics Safety and Education Foundation. Fireworks were more or less invented when the Chinese packed the new gunpowder into bamboo shoots and threw the shoots into a fire, which created a loud blast.

Why is that Christmasy? To understand you’ve got to follow the celebration of Christmas in time.

The invention and modification of gun powder revolutionized the world of hunting and warfare. It also added a new form of celebration and entertainment. The Chinese loved it. So too did the folks in other parts of the world. Gunpowder created both noise and light — which is needed to celebrate, well, anything having to do with Christmas.

In 1295, Marco Polo brought fireworks to Europe from Asia. Later, around the 13th century, gunpowder and the recipes to create it made their way to Europe and Arabia via other diplomats, explorers and Franciscan missionaries.

From there, the West developed the technology into more-powerful weapons that we know today as cannons and muskets. People in the West still retained the original idea of fireworks, though, and used them during celebrations. Jesters would also entertain crowds with fireworks in medieval England. It is only natural then that fireworks were incorporated into the celebrations of Christmas and the New Year. The Christmas season in England during these years were famous for their raucousness. Fireworks just added to the volume.

Christmas was a time then for singing, dancing and in some locations even naughty behavior. The “lords of misrule” created a season where small boys were made Bishops, men and women switched clothing and widespread drinking led to all kinds of deviant behavior. Christmas was then, as it still is for many now, the grandest celebration of the year.

Violence by roving gangs of teens was not an unusual sight during these celebrations. Guns would be discharged, bonfires would be set, and once the alcohol flowed, destructive waves of violence would destroy shops, churches and homes.

Fireworks were just a gleeful part of the overall holiday madness.

While Christmas itself was a popular festival the over-the-top nature of celebration was not widely appreciated.

In fact, Christmas revelry was once at the heart of the British Civil War. Puritan combatants in that war, in fact, banned Christmas in 1645 for the simple reason that it was so violent and destructive.

As Christmas came to the Colonies during the years of British expansion so too came the use of fireworks. Some say that Capt. John Smith set off the first American display, in Jamestown, Virginia, in 1608.

While the colonies of the South embraced the gleeful celebrations of England at Christmas time the New England Colonies of the North famously eschewed them. Fireworks were associated with trouble.  Because of some shenanigans, in 1731, Rhode Island outlawed the use of fireworks for “mischievous ends,” according to the Smithsonian

In large American cities, such as the bustling center of commerce first known as New Amsterdam and later known as New York, the celebration of Christmas was an annual crisis.

Civic leaders and leading elites worked hard to calm the streets of New York at Christmas time. It is said they leaned on the common belief in St. Nicholas to appeal to the many nationalities of citizens who brought their Christmas celebrations to New York.

Nicholas was a revered figure.

Both Washington Irving and, later, Clement Clark Moore, wrote extensively of Nicholas in their fictional writings as a means to create a more peaceful Christmas on the streets.

With the Revolution won, the first year where July 4th was celebrated featured, of course, fireworks. John Adams, on the eve of signing the Declaration of Independence, declared that the day should forever be celebrated with parades and patriotism accentuated with fireworks.

The Christmas celebrations of New York where fireworks were so prominent were a tradition that dated back to the very beginning of the colony. In this clipping from a newspaper from 1833 the rioting of Christmas was STILL a challenge in New York: 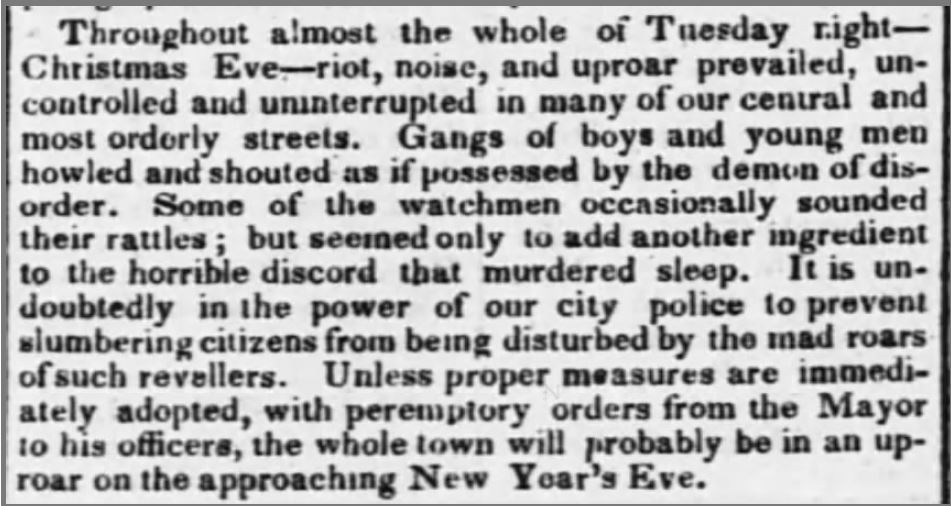 Fireworks had become common at Christmastime. In this advertisement from 1859 fireworks are mentioned next to toys as a staple of Christmas. 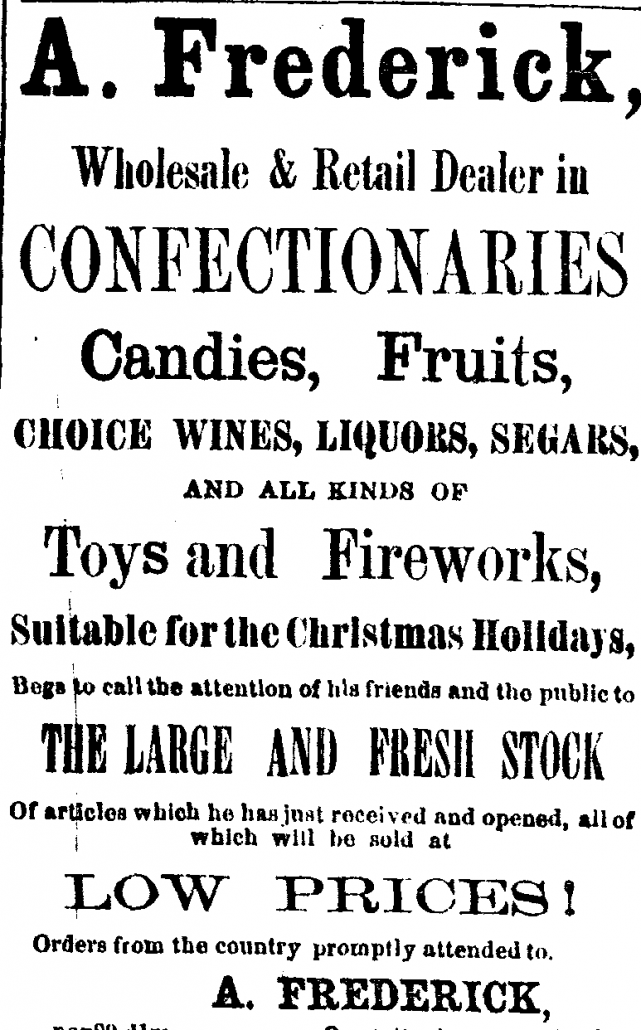 Because trouble followed the use of fireworks at Christmas this ordinance from Philadelphia was reprinted in advance of Christmas every year:

Fireworks were especially common as one got further and further away from New England. In the deep South the use of fireworks was considered a singular and nostalgic tradition by the late 19th century: 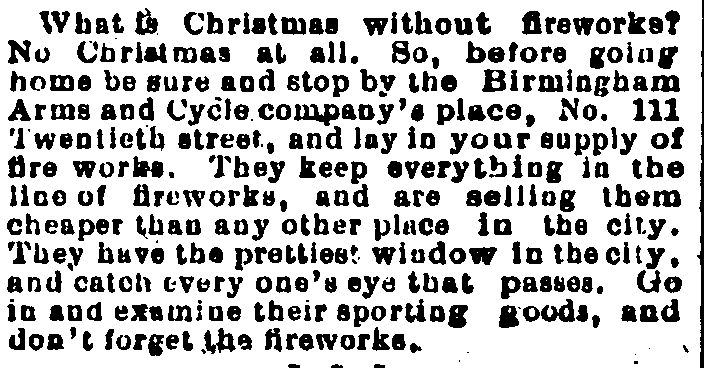 Fireworks are still a commonly used element of Christmas celebration in some cities in America, especially in areas where warmer weather in common. Christmas parades of cars and boats frequently feature fireworks.

Fireworks are very popular at Christmas still in South America. Of course, those of the Southern Hemisphere enjoy their summer during the days of Christmas, so their use to many may make more sense.