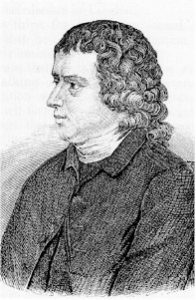 Come Thou Fount of Every Blessing has become for many an anthem of Thanksgiving — as close to a Thanksgiving carol as there can be.

The song was written in the mid-18th century by a 22-year old theology student. His name was Robert Robinson.

As a youth, Robinson was a bit of a wild child, having lost his father when he was just 5 years old. As he entered his teen years he became too much for his mother to handle so she shipped him off to London to apprentice for a barber.

At 17, Robinson set out on a night of drinking and gambling with some friends when they decided to crash a church service with the intent of mocking the proceedings.

Instead, Robinson listened to the sermon, his heart was touched and his life was changed.

He answered the call to the ministry and just a few years later wrote the words to the hymn Come Thou Fount of Every Blessing to compliment a sermon he was giving. These are the words:

Jesus sought me when a stranger
Wondering from the fold of God
He, to rescue me from danger
Interposed His precious blood

O to grace how great a debtor daily I’m constrained to be!
Let thy goodness like a fetter, bind my wandering heart to thee
Prone to wander Lord I feel it, prone to leave the God I love
Here’s my heart, O take and seal it, seal it for thy courts above

Robinson’s sermon topic is lost to the ages but the pointed words of the hymn continue to touch hearts. In a deeply personal way, the words also ironically describe Robinson’s life path.

In verse 3, Robinson says: “Jesus sought me when a stranger, wandering from the fold of God”.

Wandering would become a pattern in the life of Robert Robinson. Like many of his era, he struggled with reconciling a living Christian faith against what he was reading in his English Bible. Simply put, what he read in the Bible made little sense against what the churches of England taught.

Like many, Robinson would attach himself to one sect for a period of his life, only to abandon it for another when he found something within it that unsettled him.

His song though taught a simple gospel, one that resonated then and now for those who follow Christ.

The story is told, much later in his life, of a time when Robinson had strayed far from any church. He was one day riding in a coach with a young woman who quoted words from the hymn not knowing the very man who wrote those words was right in front of her.

He said to her, “Madam, I am the poor unhappy man who wrote that hymn many years ago, and I would give a thousand worlds, if I had them, to enjoy the feelings I had then.” She responded by telling Robinson, “Those streams of mercy are still flowing.”

Those powerful words reflect a life absorbed in scripture study.

Robinson refers to a brief passage in Samuel about the Israelites putting their trust in God. After it came to pass the prophet Samuel erected what he called an Ebenezer – which was in fact a stone monument, marking and memorializing the event – a testament that God saves.

In the hymn, Robinson boldly notes, “Here, I raise my Ebenezer”.

But nothing personalizes this song more than the admitted weakness in soul that Robinson admits, a phrase common in thought and emotion for all who cling to God, giving thanks in the face of unworthiness.

He writes, “Prone to wander, Lord, I feel it. Prone to leave the God I love, Here’s my heart, O take and seal it, Seal it for Thy courts above.”

Such a song of thanksgiving and acknowledgement of God is not only seasonally appropriate, it is at once conclusively festive as an opening hymn, if you will, to the Christmas season.

Jeff Westover
Father of 7, Grandfather of 7, husband of 1. Freelance writer, Major League baseball geek, aspiring Family Historian.
We still sing this hymn in my church. It is one of my favorites!