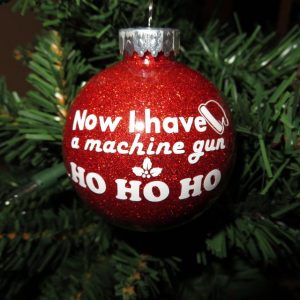 Bruce Willis is all over the news this week after he declared that Die Hard, celebrating its 30th anniversary this year, is not a Christmas movie. This has roiled the ranks of movie fans everywhere because it is one of the classic debates of both Christmas and movies.

Let me share with you a true story, a story that takes us back more than 30 years ago before Die Hard was made. Even though I have been writing about Christmas since we began here in 1991 I’ve only shared this story once, last year during an episode of Tim Babb’s Can’t Wait for Christmas Podcast in which this very topic was debated.

I was at the time a struggling college student who was working through school at the ski resort in Park City, Utah. I worked winters and attended school in the summers. It was a good strategy because work was plentiful and profitable enough in the winter to keep me from working the rest of the year.

I put in many 16 hour days or longer for one simple reason: I didn’t do drugs and I didn’t drink. Most people at the ski resort were from other parts of the country and they would descend on the resorts for jobs because they paid well and offered free ski passes. That was not for me. I wanted and needed money.

I worked a variety of jobs but perhaps the easiest and my favorite was the night-time duty I pulled down running a Utah State liquor store just down the stairs from The Rusty Nail, the only beer bar in the resort that often featured live bands.

When I say this was a store it was really just a closet. It was tiny and everything I sold in there was tiny – little mini bottles of every kind of hard liquor you can imagine. Liquor laws in Utah are strange but that was the way it worked. If you wanted booze, you had to see me and my little tip jar on the counter.

That meant plenty of rubbing shoulders with the rich and famous, including the likes of one Bruce Willis.

Now, I would contend that this was a time before Bruce Willis was, well, Bruce Willis. It came after some of his success in the 80s with the television show Moonlighting but before his movie career.

I would tell you both then and now, Bruce Willis is a great guy. He loved to ski, was there frequently, as well as at other resorts. But he skied with his harmonica in his pocket.

You see, what a lot of people do not know about Willis is that he is a terrific musician. He can play and he can sing. And often, after his ski day was done he would head for The Rusty Nail and jam with whatever band was playing.

He owned the place. It was all energy as he would take the stage, play his harmonica and literally take over the bar.

Of course, if there was any liquor needed for his escapades up there he had to come down to see me and he often did.

It was not unusual for there to be lulls in business in the liquor store and sometimes the famous would linger just a little while because we offered them a break from the fans. This happened not only in the store but also in the kitchen areas of the resort. It was just something we did.

One night Bruce came down after a session upstairs and just hung out for a few minutes. And we started to talk.

I asked him what he was working on and he said, “You’re not going to believe it but it’s kind of a Christmas movie.”

“Really?” I said. I could see Bruce doing a lot of movies but I would have never guessed Christmas was his thing.

“Yeah,” he said, “It’s not It’s a Wonderful Life or anything, I mean, I get to kill people, but it’s set at Christmastime.”

That was pretty much the gist of our conversation. So when the movie came out and I went to go see it I had to agree with Bruce Willis: it’s kind of a Christmas movie.

So to hear Bruce say now, long after his Christmas fate as a hall-of-famer has been sealed, that Die Hard is not a Christmas movie, well, it is sacrilege.

This is not the first time Hollywood has done this.

Fortunately for us, Hollywood doesn’t really get to decide these things.