It is tough for me to get through this season of “Christmas creep”. No, not the fact that Christmas is so visible in the months before Thanksgiving. I’m sick of people complaining about it. In fact — I’m offended.

What really set me off is this guy in Canada griping about how Christmas decorations in stores somehow shows disrespect to Veterans.

What a crock of Christmas crap.

My grandfather died fighting for the rights we have to express ourselves freely. He fought to celebrate Christmas early, too, if that’s what people want. It would be an offense to him to snuff Christmas at any time.

Same with my old man, who fought and survived in Vietnam.

I called him when I saw that article and I asked him how, as a veteran, he felt about it. He said it was right in line with the attitude of some people he had to face coming home from Vietnam. He said people have lost their sense of freedom and patriotism. He says it no longer shocks him that people would want to take Christmas away and blame vets for it at the same time.

I’m glad I wasn’t the only one offended by this yahoo and his cockeyed idea of squelching Christmas until after November 11th.

Like Dad said, “What is it they lay at the tomb of the unknown soldier? A wreath.” Good point, Pops.

But while we’re at it there are plenty of other people out there off their nut about Christmas. Already on Facebook I’m seeing this silly graphic: 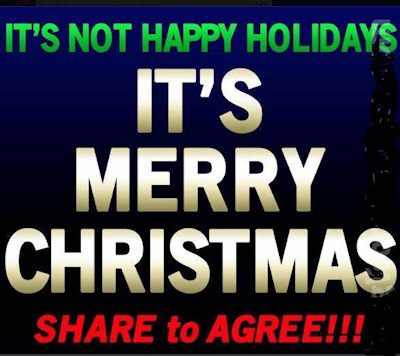 Have you seen this? Stop sharing it. It offends me.

Yes, I’m talking to you Christmas wingnuts. Yes, you Christians. Yes, you dummies who don’t know what you’re saying when you say “Merry Christmas”.

Think real hard, o ye that get offended when you hear “Happy Holidays”. The angels visiting the shepherds as they watched their fields by night didn’t say “Merry Christmas!”. They didn’t say “Happy Holidays!”. They said “Peace”. What part of that don’t you understand?

The word “holiday” is derived from the term “holy day”. Think about that. Saying “Happy Holidays” is thus NOT an offense to anyone who keeps CHRISTmas.

Now, this term “Merry Christmas”, believe it or not, isn’t the sweet, innocent little phrase we make it out to be. It hasn’t always graced the lips of our wee ones at Christmas. Our English language comes from, you guessed it kids, England. To “make merry” in England means to get drunk. Maybe that is why for the past 1000 years or more they have said either “Happy Christmas!” or “Happy Holidays” in jolly old England.

Wise up, America. Christmas isn’t what you think it is. Stop making your ignorance go viral by passing the same silly graphic around every season. I’ve seen the above graphic for 3 years now and it just gets worse and worse. IT is OFFENSIVE.

It is offensive because believe it or not Christmas is not an exclusive word to just the religious.

The U.S. government didn’t recognize Christmas and make it a federal holiday because they were endorsing the sacred Christmas. They did it because of secular reasons. Read the declaration making Christmas a federal holiday in 1870. They just wanted the day off for federal workers. That’s it. Secular as sin. Get over it.

The American Santa, Frosty, Rudolph, Christmas trees — all secular. Irving Berlin, Neil Diamond, Barbra Streisand — all Jewish and all big Christmas superstars. Why? Because secular Christmas is a thing, unless you haven’t read the news for the past 200 years.

Most secular celebrants of Christmas are totally fine hearing “Merry Christmas!” or even saying the word “Christmas”. You might even hear them singing “O Little Town of Bethlehem” sometimes, if only for sentimental reasons.

But even still, so what? If someone celebrates Hanukkah while you celebrate Christmas, what are you going to do? Get up in their grill and say “Merry Christmas!”? Of course not. When someone says “Happy Holidays” or “Seasons Greetings” to you they aren’t aiming to offend. In fact, they are probably hoping NOT to offend. You should respect that.

One thought on “I Take Offense at Your Offense”