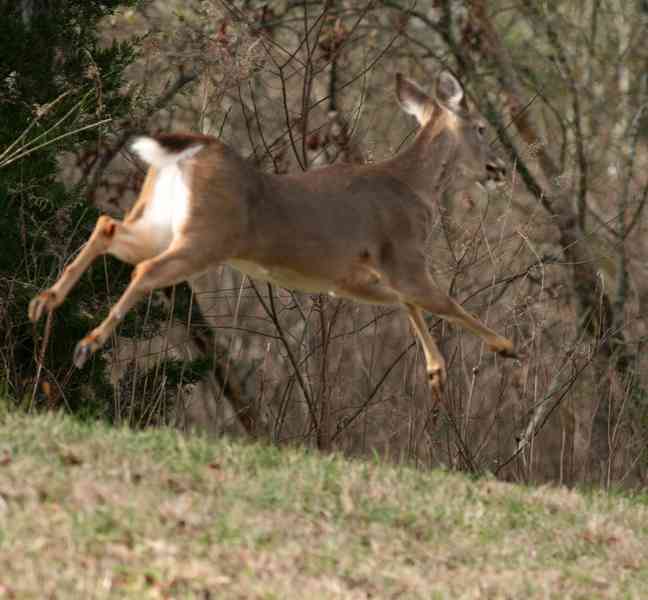 My wife doesn’t believe me. My son just shakes his head and laughs. Even the Sheriff’s Department is giving me a hard time about this. But I swear to you — I saw Santa Claus in my backyard. It was in broad daylight. And I have photographic proof that reindeer can fly.

It wasn’t even Christmas yet. It was early November in 2004 and we had had our first significant snowfall of the season. I was just beginning to drag out my Christmas lights and sort through them on my patio when I spotted the deer in my backyard.

Seeing deer in our area is not unheard of. We live kind of off the beaten path near Cheyenne, Wyoming. It is not the wide-open space it used to be but by most urban standards these days we’re pretty spread out in our neighborhood. We live on five acres and our nearest neighbor doesn’t even have a fence. Out here on the free range we get all kinds of wild animals who root about near the creek that babbles a few hundred feet behind my back lawn. So spotting the deer there that day was nothing new or unusual.

What was strange though was that when I spotted the deer she just stood there. Around that time of year they usually are foraging for food and they get real skiddish when they venture this close to civilization. And well they should — that’s prime deer hunting season in these parts! But this deer was different. She stood very graceful and she was confident. I have never seen a deer that looked like a queen but this deer just had something about her. I could not help but stare at her for a long time.

Then I heard it.

“Git up, girl!” clear as day, coming from down the hill a ways. The deer, at the sound of this, turned her head a way from me and put her head down and started to run. She didn’t run like she was startled. She ran like she was trying to do something. “Git up, girl!” I heard again, “Go — dig, dig, faster baby!”. With each coached comment I saw the strong hind quarters of the deer stretch and flex and pound into the ground and she went faster and faster. Then to my amazement she jumped.

Now if any of you have ever seen a deer run and jump you know that they can be pretty quick. In all my years I had seen it lots of times but I’m telling you nothing could have prepared me for what was next. This deer jumped and as her feet left the ground her body just continued to rise. She just kept digging and her nose lifted up as her neck strained and she rose like a swan getting out of the water. This deer was no longer jumping…this deer was flying.

I marveled at the speed and the power and the agility and the determination of this animal. I watched as she carried herself nearly 200 feet beyond my property line and then she came down quickly in the snow, turned and ran back towards me. I thought that was really strange. But before I could think anything else I heard laughter. I looked down towards the creek and there coming up the bank was a large man with a white beard. He was not dressed as Santa Claus. He had on a pair of denim overalls and a large parka. But his beard was long and white, as was his hair. If he wasn’t Santa he could have passed for his brother any day of the week.

I decided to let the man know I was there. “Hello!” I yelled from my deck. The man jumped a little and turned around.

He was very surprised to see me. He turned for just a second to the deer, said something, then walked back towards me. It took him a minute to cross the creek again and I walked out to greet him. “Hello, friend,” the man said. “Sorry to be walking around your backyard. I was just working with the deer and I guess we wandered a bit off track.”

I told him it wasn’t a problem and I shared with him my admiration for the deer. “I’ve never seen a deer do that.” I admitted. “Did you train her to do that?”

“Oh no,” the man softly said. “She was hit by a car near my home some time ago and I’ve been trying to nurse her back to health for several months. I almost thought we lost her but she’s a fighter. She is almost completely better.” Something about this man caught my eye. There was a twinkle in his eye I knew well. Something told me I wasn’t getting the full story from him.

“You know,” I said. “It has been a long time since I believed in flying reindeer.”

He laughed and merely shook his head. “Now that I’ve seen her do that I’ll believe almost anything”.

“Does she have a name? She seems to listen to you.” I observed.

“Oh, she’s wild alright.” He said. “I can feed her and she knows me but I can’t pet her. She’s too nervous. But I think she trusts me. I think she is beautiful. My wife and I call her Princess.”

I nodded. “That name suits her. Can you make her do that again. I’d like to get a picture of her.”

He frowned just a little and looked around nervously. “I don’t know if she’ll do that again. I’m thinking that now she is more mobile she’ll likely run off. In just the last few days she has become much more confident. You could hardly tell she was ever injured. If you want a picture you’d better hurry.”

I headed back into the house and my mind was racing — a flying deer, a man with a white beard and an unlikely story…none of it quite fit together. I found my camera in my desk and walked back outside. I just had to ask him.

“She’s not a reindeer, you know” I said matter-of-factly. “Only reindeer can fly like that. She’s just a regular deer. She’s nothing special.”

“Oh, she’s special. They’re all special,” he told me. “Reindeer that fly aren’t born, you know. They work for years to learn to fly…”

He stopped talking. I had him and he knew it. There was no hiding the fact that this man was Santa. He knew it and I knew it.

“Well,” I said. “She’s a beauty like you said. Nobody is ever going to believe me and I don’t care. I want this just for myself. Is she camera shy?”

With that twinkle in his eye he chuckled. “Heavens no. Shoot all the pictures you want.” He turned to the deer, whistled and she came running right up to us. This time there was no shouting from him. He looked her straight in the eye and said “Show him what you can do.”

With that she bolted into a dead run along the bank of the creek. She leaped across the creek, as I had seen dozens of deer do over the years, and she climbed the steep bank on the other side. Once free from there she kicked up snow and mud as she gathered speed and took flight. She turned in midair after flying some hundred yards or so and came directly back towards us. “If you’re going to get a good picture, get it now.” the man said.

I got the picture you see above as she turned away from me again.

She touched down on the ground again and began to poke around the weeds. She was not breathing hard. “She has a lot of work yet to do,” the man said. I was breathless over what I had just witnessed. I forgot to ask him lots of things. “I best be getting her home”, he said.”Nice to meet you, friend.”

Without thinking, I yelled out to him: “Merry Christmas!”

He turned and smiled. He waved and walked away, his deer friend following not too far behind.

The Magic of Santa