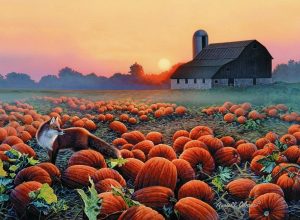 The Thanksgiving of old America included a serious reverence the people of the 18th and 19th centuries had for pumpkin pie.

Said the editor of the Philadelphia Ledger in 1837 “that he should like to be thrown into a pumpkin pie as large as Lake Superior, only deeper, and obliged it eat his way out.”

Some historians and foodies would have you to believe that pumpkin was a staple of the early American diet. But don’t you believe it. There was nothing normal or routine or regular about it.

It has been, from the very beginning, a harvest food forever linked to Thanksgiving – special, unique, savored, and saved for one very special occasion.

People were crazy for it.

The media of the times had not much to say about most Thanksgiving traditions but about pumpkin pies they were not shy. Here’s part of a verse that we found dating back to the 1720s and reprinted at Thanksgiving for decades:

Our discovery of this pumpkin passion of the 18th and 19th centuries was quite accidental. We found and shared an article that claimed in 1802 New Englanders averaged 10 pumpkin pies per family for Thanksgiving.

Our first thought was “Gee, they must have been really good. How did they make it?

Did they make pumpkin pies then the way we do now?

Here is how it was done, according the Schenectady Reflector of 1836:

“Pare and cut the fruit into small pieces, stew till it is soft, strain it through a coarse sieve or cullender, add milk till it is of the consistence of a thick custard; to each quart of this add three eggs, sweeten to your taste, and spice it with nutmeg and ginger. A little wheaten flour can be shaken in to thicken it. It is then to be prepared on a bottom paste, and backed like a custard pie.”

This recipe is consistent with many others we found dating back as far as 1720.

In fact, Thanksgiving and pumpkin pie had gone together for so long we found variations of the recipe going back to the 17th century.

This is how it was done from a cookbook published in 1675 called the Gentlewoman’s Companion, written by Hannah Woolley:

Take a pound of Pompion, and slice it; an handful of Time, a little Rosemary, sweet Marjoram stripped off the stalks, chop them small; then take Cinamon, Nutmeg, Pepper, and | | 146 a few Cloves, all beaten; also ten Eggs, and beat them all together, with as much Sugar as you shall think sufficient; then fry them like a Froise; and being fried, let them stand till they are cold; Then fill your Pye after this manner: Take Apples sliced thin round-wise, and lay a layer of the Froise, and another of the Apples, with Currans betwixt the layers; be sure you put in good store of sweet Butter before you close it. When the Pye is baked, take six yolks of Eggs, some White-wine or Verjuice, and make a Caudle thereof, but not too thick; cut up the lid and put it in, and stire them well together whilst the Eggs and Pompions are not perceived, and so serve it up.

But again – we were surprised not so much by the recipe but rather the enthusiasm for it.

This was most often expressed in poetry.

“For pottage and puddings and custards and pies,
Our pumpkins and parsnips are common supplies:
We have pumpkins at morning and pumpkins at noon,
If it were not for pumpkins, we would be undoon.”

More than 200 years later, the love of pumpkin was going strong in this verse that was popular nation-wide:

“Oh the pumpkin pie is the pie for me,
It’s beauty I greatly admire;
“Tis the pie that belongs to the ‘land of the free’,
It is good for the child and its sire.

“Oh, the pumpkin pie is the freeman’s pie,
And in it we’ll put our trust;
No humbug, like mince, can in it lie,
And it beareth no ‘upper crust’,

If pumpkin pie but grew on trees,
And on the branches would sway,
They would fill the air with a perfumed breeze,
And I’d shake the trees every day.”

From 1854 this is how far pumpkin had come in the national esteem:

“O yellow orb! No hand divine is nigh,
To snatch thee up and set thee in the sky,
A modern start, uncatalogued and new,
To fright the saints and brother science too;
But bide they time! – when chill November falls,
A voice shall issue from the State House walls;
And every person, from his pulpit high,
Proclaim aloud Thanksgiving day is nigh.

Then, when around the domestic board
Affection’s tide has tremulously poured;
When the fond mother – years of absence o’er —
Clasps to her heart her wandering child once more;
When love, refusing to be longer pent,
Smiles in the eyes of timorous assent;
When laughing childhood, full of fowl and fun,
Finds to it wonder that it cannot run —
‘Tis then, O premium pumpkin! Then shall shine
In splendor new this excellence of thine.
Pie of my country! Still upon my breast
Midsummer sunbeams in November rest;
The magic circle of thy snowy paste
Delights the eye and titillates the taste,
While through thy form the steel is ranging bright,
Our aqueous mother are puckered with delight,
And like faint soldiers who from fight would cease,
We cry for quarter and demand a piece.