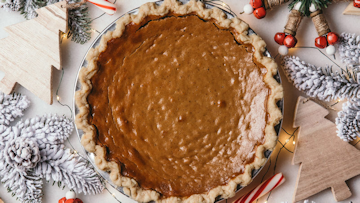 When it comes to Christmas the United States can lay claim to few traditional elements of the season. Christmas trees came from Germany, Santa Claus came from Turkey, while Christmas pudding, eggnog and mistletoe all came from various places in Europe. America just adopted them all.

Except for pumpkin. Pumpkin is one of America’s greatest contributions to Christmas.

Wait, you say – pumpkin has nothing to do with Christmas in America?

Well, hold on there, pilgrim. The pumpkin was, from the very beginning, a festive element in the Puritan Christmas.

Wait, again, you say – the Puritans didn’t celebrate Christmas, they banned it, right?

Right. Except they didn’t.

Historians make much of the publicized ban on Christmas from Governor William Bradford in 1621. But they fail to explain why Christmas was such an abomination to the Puritans in the first place.

The puritan movement was born more than a hundred years earlier with the printing of the Bible in English. What educated Englishmen learned from their own Bibles was that the Churches of the period read to them from the Bible in Latin because what they were teaching strayed far from what the Bible actually said.

When it came to Christmas especially there was simply nothing Biblical about it.

In fact, Christmas in 1500 in England was a season of riotous celebration with brawls in the streets, excesses in drinking and food, role reversal in the church and even sexual improprieties that priests once a year condoned and participated in.

Christmas then became a flashpoint in the English civil war and when the Puritan settlers arrived in America in the 1620s they were committed to creating a society based on Biblical purity, hence their name, Puritans.

The first thing to go was Christmas.

But that doesn’t mean there was no Christmas.

Bradford ran into immediate resistance when he tried to make December 25th of 1621 a work day like any other day. Several protested, calling it against their conscience to work on that day.

It was to them a holy day.

And that meant no work.

But that did not mean no Christmas. Quietly, families of the time used the day to gather, eat and pass time together – and it was a time to partake in traditional elements of Christmas that were not out of step with the Bible.

Over time, as New England populated away from the busy centers of Boston, diversity fractured the Christian church landscape.

Methodists, Baptists, Congregationalists and Universalists all celebrated Christmas but did so in different ways. Almost all were very different from the Christmases of their grandfathers in merry old England.

But their religion melded with their lifestyle of survival. It was a life of farming and hunting, of building, gathering and forging with steel, copper and other metal.

They worked each day of the week, except on Sundays – the Sabbath. And each week of the year was like every other because the need to work and be productive was critical to the survival of the colony.

It was a hostile environment. Native Americans were both friend and foe and even in Church the earliest Americans did not venture forth alone or without firearms.

Only the weather could stop their routines and the seasons, in fact, became routine as a time of rest, family gathering and celebrating holidays in their spiritual way. Christmas to Puritans was a time of togetherness and a time of celebrating the accomplishments of the harvest. As families they would gather to pray, to eat and celebrate their hard work.

They made do with what they had. They adapted to the natural foods that were available and grew their traditional crops as best they could. One of the native elements they quickly came to appreciate was the humble pumpkin.

The pumpkin was plentiful, colorful and plain. That made it versatile. They could cook it and mix anything with it – adding color and surprise to traditional mixes. Pumpkins, unlike the boring apple, became to them a festive element of the season.

Recipes aplenty abound of pumpkin used for all meals of the day. It wasn’t always a dessert – often it would garnish a main course, serve as a base for soups and custards and even found its way into breads. As the American countryside would fill with peoples from different nations and cultures the pumpkin was adopted further for use in pastries, beers and even as an herbal remedy for sickness and injuries.

As the printing press took hold in America the newspapers of the time marked the passing of the season and without fail there was usually a poem, a statistic or a story about the preeminent element of the season: the pumpkin.

For pottage and puddings and custards and pies,
Our pumpkins and parsnips are common supplies:
We have pumpkins at morning and pumpkins at noon,
If it were not for pumpkins, we would be undoon.”

Nearly a century later, the now-established American tradition of gathering family and celebrating with pumpkin pie was written of in this way:

From the very beginnings of the printing press in America until well AFTER Thanksgiving became established as an official, declared federal holiday in 1865 the tradition of family and pumpkin was spoken of and celebrated at Thanksgiving and especially Christmas.

Everything else Christmas in America came after: Christmas trees, candy canes, mistletoe – everything, followed the lowly, festive pumpkin to American Christmas celebrations.

Take a listen to the Merry Little Podcast episode of Pumpkin Love: