Sad to say this but our tradition of bashing yet-to-be-released movies of a Christmas theme continues. You could say we are compelled to put the screws to the new Nutcracker coming out this fall.

Hollywood just gives us no choice.

This time, as other times in the past, the maker of a holiday stinker is none other than Disney.

Out now are some truly bizarre trailers of a butchered Nutcracker story that Disney calls The Nutcracker and the Four Realms.

As discussed in a recently released edition of the Merry Podcast, the Nutcracker is a 200 year old tale written by ETA Hoffman, then adapted by Alexandre Dumas and then interpreted by music and dance by a Russian ballet company.

The story is a childhood fantasy run amok:

We see them in a typical 19th century Christmas setting around a tree and about to receive their Christmas gifts. In waltzes the Toymaker, who impresses them with all manner of wonderful playthings only to put them away for safekeeping while the children go to bed.

As if to satisfy them a little, the toymaker breaks out The Nutcracker, a small wooden device made for cracking nuts that is ingeniously made to look like a little man.

The two central children characters – Fritz and Clara – immediately take to the Nutcracker and Clara in particular is quite smitten with it until Fritz seems to break it.

Worried, she gets up in the middle of the night to check on it, and wanders back into the room with the Christmas tree as the clock strikes midnight and witnesses the Christmas tree grow to a magical height and the Nutcracker transforms into a life-sized man – and he’s come to life.

Soon Clara finds herself a witness to chaos as the room fills with Mice and Gingerbread Soldiers, who have come to do battle before her. The fantasy continues, as a lot of little girl fantasies do, involving a prince, dancing fairies and love everlasting.

That’s the classic-story-turned-Christmas tradition set to Tschaikovsky’s world famous score and one you would think Disney would embrace in their princess-film traditions.

But these are different times.

It has been nearly a century in the making in America and the story is known and loved like few ballets ever produced.

But nearly every movie version of The Nutcracker bombs. Seriously. Name one that you can remember, much less call good.

Maybe that’s why Disney is breaking the bank in producing a hybrid Nutcracker story that mashes up the classic tale of Clara with…I don’t, know…a combination of Narnia, Harry Potter, and Lord of the Rings sprinkled with a little Marvelesque pixie dust.

How far does Disney stray from the traditional Nutcracker?

Well, they replace Tschaikovsky with some emo pop tune by No Doubt titled “Just a Girl”.

They have taken what is brilliant and replaced it with a slick, inauthentic and plastic Christmas-themed franchise formula fantasy that not only is designed for multiple sequels but to also brainwash you with feminist messaging that will, in the end, sap any hope of Christmas spirit.

Already you can see that this movie cannot decide what it wants to be.

Disney already has a library of really bad Christmas movies: Jim Carrey’s A Christmas Carol, The Santa Clause 3, I’ll Be Home for Christmas, and Santa Paws 2.

This one could be the worst of them all. 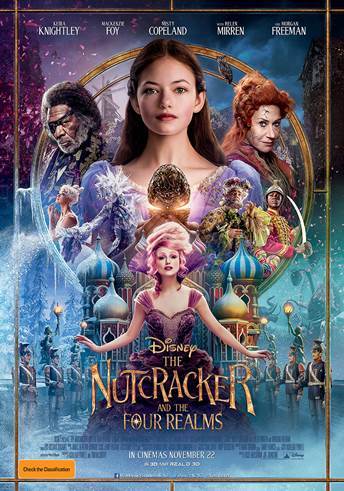 Jeff Westover
Father of 7, Grandfather of 7, husband of 1. Freelance writer, Major League baseball geek, aspiring Family Historian.
If you are referring to the I'll Be Home for Christmas with Jonathan Taylor Thomas,I really LIKE that movie and one of my fond memories is seeing it in the theater with my mother and grandmother, who rarely went to movies. I had it on DVD before moving to the North Pole, but have since lost it and cannot locate a new copy. But, I digress, as someone who never understood The Nutcracker to begin with, I appreciated the recent podcast giving a comprehensible summary. Maybe it will not be that bad.
I very much consider myself a traditionalist - I grew up with parents and grandparents who embodied everything about a Norman Rockwell Christmas - I do very much enjoy the traditional Nutcracker - but this is a new generation, and this generation likes wild fantasy adventures and visuals that tell you what is happening - the imagination is lost....
It's just my opinion, but Disney has done a fantastic job of putting out some extremely horrible live-action movies that were otherwise successful animations. Although the Nutcracker is not an original Disney-animated film, I think this goes hand-in-hand with the aforementioned movies. I do hope Disney finds their way back to doing what they do best.

I had the misfortune of watching Disney's version of the Nutcracker tonight. I am not going to be as eloquent as the rest of you. What a raging stinker! It was a steaming pile of pig excrement! Anything that deviates from the original ballet story angers me beyond words. I was so blasted PO'ed after I watched it, my daughter and husband noticed. That is pretty bad. I feel like I have to stay up for an extra 2 hours just to make up for the wasted time.

I'm not sure how many have heard of this movie, but I loved "Barbie in the Nutcracker." Although, I suppose you have to be a fanciful girl to enjoy the movie. I appreciate that the movie's message of bravery for little girls does not mix in messages of dominance and savagery that are so common in movies portraying strong female characters this century. Clara's character is intelligent and loyal, characteristics that I think tackle evil far better than pulling out a sword. The Nutcracker is gentle and strong, providing an example of a proper man. I'll say one more thing: that movie introduced the beautiful music of Tchaikovsky to me when I was young, for which I am forever grateful. Shame on Disney for making their Nutcracker's title song an outrageously auto-tuned feminist jingle.