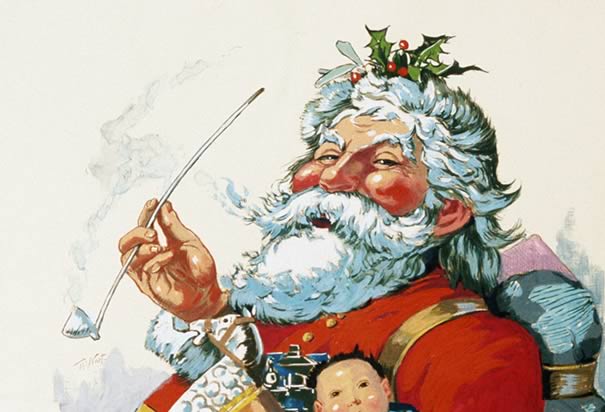 Some would call the tracking of Santa a fairly recent phenomenon. After all, you need technology to follow the Big Guy. The truth is that Santa has been anticipated and tracked for centuries.

Ancient stories of La Befana (Italy), Baboushka (Russia) and Black Pete (Spain) all have elements of anticipating a gift bringer and tracking his location.

Clement Moore’s poem A Visit from St. Nicholas likely did more to advance the image and anticipation of Santa Claus in the home than any other piece of literature in the 19th Century.

The poem was reprinted year after year in newspapers across the world and gave rise to imaging by artists who would interpret the story in drawings that captured the imaginations of millions. It brought a unifying vision of Santa as a person and made anticipating his arrival on Christmas morning a grand event.

Some times, Santa was more known for when he could not come. During the American Civil War children in the American south were greatly disappointed when mothers, fearing a blockade of goods from the North, told their children that Santa could not make it past battle lines between the blue and the grey.

As Santa’s commercial value continued to grow in American culture so too did his presence in the media evolve.

He began appearing in ads for retailers and at live community events around the world. His broad appeal caused children to send him letters via the U.S. postal service and his whereabouts were broadcast independently first on public radio stations back in the 1930s.

In the mid-1950s an advertisement for Sears featuring Santa Claus was published in Colorado Springs, Colorado featuring a telephone number that Santa fans could call. But the ad listed the wrong number and instead directed callers to the Colorado Springs’ Continental Air Defense Command Center (CONAD).

On Christmas Eve 1955 a local commander directed that all children calling for Santa were to be told Santa’s current location. CONAD was replaced by NORAD (North American Aerospace Defense Command) but the Christmas tradition continued. For decades the military supplied the media with regular updates, which were then disseminated via radio and television. In the late 1990s their efforts moved to the Internet and later to social media.

The first Internet Santa tracking was launched in 1994 on an early Christmas website known then as MerryHolidays.com. It was born of an effort to fax a “Santa Update” to a little girl who doubted the existence of Santa Claus in 1991. She shared the faxes with friends, who shared them with other friends and for several years the faxed updates of Santa’s Christmas Eve location was traveling the globe, ironically to many military bases where American families were stationed.

That effort moved online where it was eventually given its own website, SantaUpdate.com. Santa tracking at Santa Update actually begins around Thanksgiving and continues until Santa circles the globe on Christmas morning.

By the mid-2000s Santa was all over the Internet, in social media, and available via special apps designed for cell phones and other mobile devices.

NORADs online Santa tracker by far gets the most traffic and media attention every holiday season.

In 2012 they were challenged by Google, who launched a new tracker featuring Google’s map technology.

History of the American Santa

Why There Really is a Santa Claus