The humble Christmas ornament rarely gets much thought for its significance and purpose.

For many the Christmas ornament is merely decorative, a simple environmental adornment of the season.

Most can look at an ornament and see it as nothing really special.

Like nearly all things Christmas the history of Christmas ornaments is glossed over by historians and peddlers of merchandise.

At Hallmark, who makes millions from sales of specialty ornaments annually, they can only say “For many people, decorating their home and Christmas trees with ornaments is one of the most enjoyable ways to capture the magic and excitement of the holidays.”

At Wikipedia, the modern go-to source for all knowledge it seems, they can only note “The first decorated trees were adorned with apples, white candy canes and pastries in the shapes of stars, hearts and flowers.” No explanation is given about why this may or may not be true.

Most historians are worse.

Some can’t seem to acknowledge ornaments before the 19th century, claiming them to be merely Victorian inventions.

Your Christmas ornaments are much more than all that and much older than that.

Do not let the fast, convenient and erroneous Internet history of Christmas lull you into thinking that the ornaments on your tree are so meaningless and shallow.

Christmas ornaments are much like the ancient music of Christmas.

They were devised not to entertain or to decorate but rather to educate.

Ornaments are a natural showcase of symbols and an open invitation to storytelling. Through them ideas are conveyed, principles are taught and life lessons are shared.

That was their use anciently and it was a practice used widely in the ages before printed books and organized schools.

Much as the Christmas tree is full of symbolism that teaches spiritual values so too do ornaments provide lessons of eternal life. 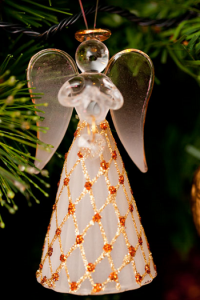 The first ornaments were focused on seemingly natural objects: trees, stars, and plants. These environmental objects were used to teach of life’s purpose and the life beyond.

This is one of the oldest methods of teaching.

The earliest records of man showcase over and over the symbols, types, similes, metaphors, parables, allegories and shadows used over and over again to teach scriptural principles.

For example, Genesis tells the story of Adam making an animal sacrifice to God.

When asked why he did this, Adam was honest and said, “I don’t know”. Adam was then taught about the symbolism of the act and that it represented the sacrifice of God for man.

Symbolic language and imagery have the power to convey important truths through many languages and cultures with great power and impact.

That is where ornaments on Christmas trees found their start. The tree itself was a symbol – and ornaments were added to the tree to add to the teaching behind it.

Stars were used to convey principles of heaven.

Angels were used to teach about revelation and communication of God to man.

Fruits – such as apples – were used to tell the story of Adam and Eve, a story where layers of symbolism teach of man’s relationship to God.

In fact, ornaments were an outward manifestation of the many symbols found within scriptural teaching.

In the Bible, concepts such as baptism – which is a symbol of death and re-birth (Romans 6:3-6) – are reinforced through things like ornaments, statues, and objects.

Naturally, for many the symbols of the season became elements of worship as the lessons are learned.

As such, great efforts were put into crafting ornaments that were not only meaningful but also exquisitely made with superior materials and meticulous craftsmanship.

Ornaments then became treasured and traditional, passed down from one generation to the next.

They became as well a means of not only learning sacred things but of appreciating family history and knowing generations past.

Just as naturally, as ornaments have continued to evolve as a key element of seasonal celebration, so too have marketers and merchandisers capitalized on their popularity.

Over modern times as Christmas celebrations have become more secular, so too have ornaments wandered from their original intent.

Ornaments today really do symbolize the “Christmas character” of those who use them.

An ornament made of olive wood that shows a simple Nativity scene may represent the spiritual significance of the season to one person while an ornament showcasing a sports team logo or popular cartoon character may be representative of a Christmas secularist.

The ironic thing of it all is that despite the many changes that have come to ornaments in modern times they have retained their ancient messaging power – they still symbolize and thus they still teach.

What do your Christmas ornaments say about what you think, feel and believe about Christmas?

Jeff Westover
Father of 7, Grandfather of 7, husband of 1. Freelance writer, Major League baseball geek, aspiring Family Historian.
Initially, when growing up, it not only helped to symbolize Christmas, but also represented family for me. Dad did the lights (though for safety sake, as they were not as easy to handle as they are today), Mom put on the garland and then we all placed the ornaments on. Naturally we each (four of us) had our favorites. For the most part, we only had ball ornaments and most were made of glass. I loved the way the various shapes and colors caught the lights and then reflected it between them and across the room. I'm sure many would agree that when you add lights to a tree, it becomes special, but then add the ornaments and it can almost be magical. The tree top angel of course always reminded us of the real "Reason for the Season".
When I left home and entered the military, I still wanted a tree that was decorated around Christmas time. Even if I was the only one who had a hand in it, I could still feel the family unit in what I was doing. The only sad note, it that I never knew what happened to all our stuff after we all departed. So, I have nothing from my early years. Which only inspired me more to make some new memories that I could pass down as the years went by.
Today, besides ball style ornaments, I do have others that go on the tree. For the most part they are childhood reminders such as Hallmark's Crayola line (from the very early days when colored pencils were rare and coloring books were a normal part of growing up) and a few superheroes from my comic book collecting days. Of course there are the special ones picked up as reminders of vacation spots, first year together (my marriage), first home and the occasional whimsical ones that just catch your eye. The most special one I own is a small 3" round piece of wood with a golden loop chain attached that was made by my son for me when he was five (34 years ago). I was painted "Christmas" colors and simply says Merry Christmas on one side and I Love You on the other. It always goes on the main tree (we put up between 4 - 6), centered and is the first one to go on and the last one to come off.
So as the years pass, I can look at the tree(s) and if I desired, could probably spend several days just allowing the flood of memories to fill my hours. And in so many ways, much better than any Christmas movie or TV Special that I have ever seen.