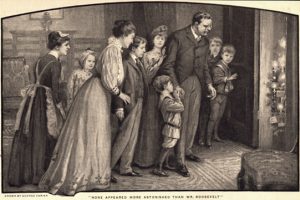 Christmas in 1902 was celebrated much as it is today.

But the centerpiece of it all was the Christmas tree.

Like many popular icons of the 19th century Christmas the tree was made popular by British Royals, who publicized their use of a Christmas tree indoors. German immigrants to the US brought their Christmas tree traditions with them but once magazines published the royal trend in holiday celebration it took off in American culture.

With the advent of electricity and thus the use of lights on trees in the 1880s Christmas trees seemed destined with a forever place in the American home.

There were, however, huge concerns with the trend in 19th century America. These were the days before fake trees and Christmas tree farms. When an American family wanted a Christmas tree they did not go out and buy it. They went on a hunt for it – and cut it down.

For the environmentally concerned – like President Theodore Roosevelt – the practice of celebrating Christmas with once live and growing trees was a huge concern. Millions of people cutting down millions of trees every December would in time lead to devastating effects on the environment. Some took to calling the use of Christmas trees as “aboreal infanticide” and “un-American”.

President Roosevelt quickly banned Christmas trees in his White House – a tradition that was maybe only 15-years old at the time anyway. He did not think, given the very public controversies over Christmas trees, that it would be that big of a deal.

But within his own home he had children with different ideas. They loved the idea of Christmas trees. And they were determined to get one.

Roosevelt’s two youngest boys, Archie and Quentin, went outside and right there on the White House lawn brazenly cut down a small tree. Taking it in through a back door they hid the tree in a closet.

The boys decorated the tree in secret. Then they enlisted the help of an electrician on staff at the White House in putting lights on it.

On Christmas morning Archie gathered the family, including the President, in front of the closet door. He threw the switch and opened the door to reveal the tree in all its lighted glory as a Christmas surprise.

The President described that Christmas morning in a letter later:

“…Yesterday morning at a quarter of seven all the children were up and dressed and began to hammer at the door of their mother’s and my room, in which their six stockings, all bulging out with queer angles and rotundities, were hanging from the fireplace. So their mother and I got up, shut the window, lit the fire (taking down the stockings of course), put on our wrappers and prepared to admit the children. But first there was a surprise for me, also for their good mother, for Archie had a little birthday tree of his own which he had rigged up with the help of one of the carpenters in a big closet; and we all had to look at the tree and each of us got a present off of it. There was also one present each for Jack the dog, Tom Quartz the kitten, and Algonquin the pony, whom Archie would no more think of neglecting that I would neglect his brothers and sisters. Then all the children came into our bed and there they opened their stockings….)”

Roosevelt claimed to be amused by his sons. But he did not let the matter rest. He took them to see his environmental advisor, Gifford Pinchot, hoping he would explain why chopping down Christmas trees was a bad practice.

To his surprise, Mr. Pinchot actually supported the idea of thinning overgrown forests of larger trees so that sunlight could reach the younger trees that didn’t have access to the sun.

Teddy Roosevelt was not anti-Christmas. Some histories depict him as having banned Christmas trees, which is also untrue.

Most years when they were in the White House the Roosevelts did not have a tree. But that was more of a matter of public policy than private desire or concern.

One thought on “Tale of a Presidential Christmas Tree”