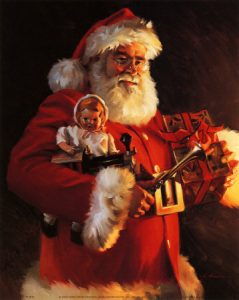 He looked so strange to me.

It was the first time I had seen Santa wearing something other than his Santa suit.

He was speaking before the Chamber of Commerce, one of those networking functions you always hate to go to.

His comments were brief, conservative and frankly kind of bland.

Here I was seeing Santa in the real world for the first time. I wasn’t convinced I was witnessing the same person.

We met later at his office, a very casual almost messy kind of place.

His desk was large but looked like it came from Ikea. A small table behind it was covered with more pictures than could be looked at while a mounted elk jutted out from the far wall, as if listening to every conversation held in the room.

From these modest trappings no one could assume that Santa was loaded.

But I had since learned that his business reach was pretty long and he is worth millions.

His business interests go far beyond our country valley – he’s got companies in Colorado, Nebraska and Canada, too.

“Nobody here knows you’re Santa Claus?” I asked behind the closed door.

“Nobody. And it needs to stay that way” he insisted.

I asked him if anyone that knew him had ever seen him as Santa or recognized him “in uniform”.

He said once had he put on the suit for his grandkids but that it was the most nerve wracking experience of his life.

They certainly enjoyed it more than he did. He swore he would never do it again.

It’s the pressure. Santa takes being Santa so serious that those worlds just cannot collide, he explained to me.

“I can’t lie to a kid,” he told me. “If a kid looks at me and says ‘I know you’re not the real Santa’ or ‘I know there is no such thing as Santa’ I’m not going to argue with him. If I can’t do this honestly I won’t do it at all. St. Nicholas was a real man and few really know the story. But I know it. I can tell it. But honestly it isn’t about his story – it is about being him, being Saint Nicholas.”

“Are you afraid that if people you know are aware that you’re Santa that you’ll be bugged to do it all the time?” I asked.

“I only do this in December when I can and don’t misunderstand me, I love it. I love being Santa. But the experience playing Santa the first time taught me that every time I put on that suit I pray. I make it a sacred experience.”

Ok. I had heard him twice now talk about his first experience wearing a suit.

“What happened that was so bad that first time you put on the suit?”

“I was working on contract with a local company that I ended purchasing,” he said.

“I was there for three months working their financials, got to know some people, and got sucked into going to the Christmas party and eventually asked to put on the suit. Just before Christmas it was announced that I was acquiring the company and thus becoming everyone’s boss. I had already committed to the suit thing, wasn’t sure how I felt about it and just walked in totally unprepared for what would happen. Thank goodness my wife was not there. Santa attracts all sorts and he’s got no place at a company Christmas party,
I’ll just say that. I felt dirty afterwards, like I had worn a priest’s robes for Halloween or something.”

“So what convinced you to put the suit on again for real?” I asked.

“Redemption, I think. Guilt…” he admitted.

“I wanted to make it right. The rest is history.”

“But why hide that?” I said. “I think you’re a wonderful Santa. Magical. Almost perfect.”

He shook his head. “Because it is like I told you,” he explained.

“Santa makes me a better man. He forces me to give without recognition because he has taught me the pure power of love in doing that. The minute I am found out any biases associated with me bleeds into the purity of Santa and his intentions. That isn’t Christmas and ultimately that isn’t why I’m doing it. Giving, I’m convinced, was meant to be completely anonymous. You don’t find yourself until you lose yourself completely. Jesus said that and I didn’t get that until I found I could give anonymously under the cloak of Santa Claus.”

How do we clone this guy?

A day later I was standing in the cold, this time with my kids – who are all ardent fans of Santa Claus. They also happen to be experienced critics.

They know a good Santa when they see one. I didn’t tell them a thing about what they were about to see. I wanted to get their honest assessment.

It was cold, trying hard to snow, the sky cold and gray. The band had passed, then the horses, then the Boy Scouts.

Now came Santa, on the fire engine – lights ablaze, horn blowing and an occasional sounding of the siren announcing him to the crowd, as if he needed an introduction.

Santa was digging it.

Every little boy wants to be Santa riding through town on a fire engine and Santa could not hide it.

He waved, he pointed, he said hello. He climbed down a ladder and hung off the side and did high fives along one side of the street.

At one point when the parade slowed to a crawl he climbed down, and walked towards the crowd only to be mobbed with kids who begged to ride the fire engine.

Santa lingered, nearly pulling the parade to a mere crawl as he worked the crowd. The cheers, the excitement and the energy would only mean that his line would be longer than ever on this, the last appearance he would make in town this season.

I urged my girls to hike over there with me so we could be deputized as elves and help pass out candy to all the kids.

We got there long before Santa did. So too did Mrs. Claus, who not only had us pass out candy but also arranged for hot chocolate for the line-up of kids.

I could tell she was a little worried about Santa’s late arrival.

He was brought over by a police cruiser – lights flashing, of course – but he slowly got out of the car and approached Mrs. Claus, whispering into her ear.

Santa was profoundly sad, his face drawn with pain and shock.

This is Part III in our series telling the true story of a small town Santa. In Part II, we saw Santa in action. In our next installment, Santa has to make an appearance he doesn’t want to make — because not everything is about Santa.